Some experts will state that children should play with dolls in their early years as it assists in developing motor skills, communication skills and teaches them compassion. Though what happens when your child’s doll is haunted…

Robert Eugene Otto or known to some as ‘Gene’ is a talented author and artist… but if you search for him on the internet, all you find is the story of his haunted doll, also named, Robert. Very few have seen any of Gene’s work because his talent is covered by a veil of paranormal stories of his childhood doll.

Gene first received the doll as a child from his grandfather. His grandfather had been on a trip to Germany in 1904 and brought the doll back as a gift. Gene named the doll after himself, Robert. He loved his 3 foot doll and his family often heard him having conversations with the doll. 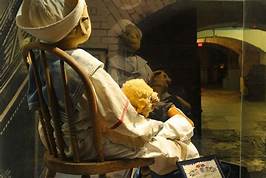 Though, it wasn’t until Gene began to blame the doll for anything that went wrong. At times Gene began speaking to the doll in a sinister voice and one night in the middle of the night, the family woke to Gene screaming that the doll had done it.

This is when Gene’s parents locked the doll in the attic.

Gene continued to live in the home with his family until he moved on to become a prominent artist and author.  After Gene and his family left the home, leaving the doll in the attic, a new family moved into the home with their daughter. The 10 year old girl found the doll in the attic and some time after reporting to her parents the doll was torturing her and tried to kill her.

Once again the doll was left in the home after the family moved. Throughout the years various tenants lived in the home and all encountered odd sounds, a child’s giggle, footsteps in the attic and once a plumber stated that the doll moved itself across the room.

On May 3rd, 1930, Gene married Annette Parker in Paris. The newlyweds returned to Gene’s childhood home to live with the doll still in the home. Gene died in 1974 and his wife Annette passed a few years later.

After the couple passed, the home was sold to Myrtle Reuter. Myrtle lived in the home for 20 years with Robert. Myrtle wasn’t afraid of Robert, she became his companion and later once she sold the home and moved, she took Robert with her. Often she claimed that Robert was still quite active and would move about the house on his own. She fully believed that Robert was haunted.

In 1994, Myrtle donated Robert to the Fort East Martello Museum. She told the museum he was very haunted and moved around on his own. Shortly after, Myrtle passed away.

Almost immediately the museum staff noticed an energy shift within the museum. The museum did not place Robert in a display right away, though visitors heard this was Robert’s new home and began requesting to see the doll.

The museum finally placed Robert on exhibit and visitors and staff noticed that electronic devices were being affected at his display. The museum also began to receive letters addressed to Robert, the doll, apologizing for any disrespectful behavior and also asking for forgiveness.

These days, letters continue to come addressed to Robert and he has been the subject of many ghost hunter shows. Robert is visited by psychics and skeptics. You can visit him at the Fort East Martello Museum in Key West, Florida. You’ll find him dressed in a child size sailor suit holding a little stuffed lion. Most believe the child size sailor outfit belonged to Gene.

No one knows for sure if Robert is possessed or haunted, though some speculate that he was cursed. When the original owner Gene had the doll, it is said that his parents were not good to their servants and  seeking revenge, the servants placed a voodoo curse upon the doll.

Is Robert cursed with a voodoo curse or possessed by a playful little spirit? We may never know and simply will leave this to the realms of the unexplained.