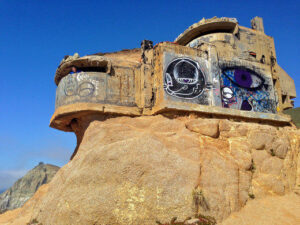 Devil’s Slide attracts people from near and far. Some visit to hike or bike, others to gaze at the views. Whatever the attraction is for most, it’s a popular location for many. Located in San Mateo County in California and nestled between Pacifica and Montara. Named Devil’s Slide based on the steep, sharp edges that will almost always result in injury or death as well as the consistent rock slides that caused major damage to the highway. Devil’s Slide is actually a piece of California State Route 1 that was mostly destroyed in a 1940 landslide. In 1995 another sizable landslide occurred and closed the road for two years. By the mid 2000’s the locals began to lobby for a different route, bypassing the route altogether. During World War ll, Devils Slide was used as defense for the San Francisco harbor. A triangulation station as well as 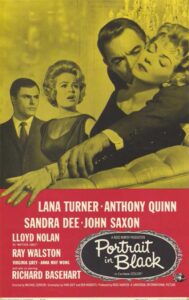 an observation site allowed the military to watch for ships coming towards the bay. In total, there were six structures: two concrete earth bunkers, a reinforced steel observation tower and three concrete steel observation boxes.Today nothing remains except for a large piece of an original bunker. A private owner purchased the area in 1983 and has fenced it off keeping the general public away. Though it is a magnet for graffiti, covered in colorful graffiti and art. My favorite piece of history from the Devil’s Slide is its use in a scene of the 1960s thriller, Portrait in Black. Legendary actors, Lana Turner and Anthony Quinn portray adulterous lovers who conspire to murder her husband. With permission from the State of California, Universal Film studios filmed the two actors, Turner and Quinn pushing a car off a cliff as it contained the body of a murdered man. Once the scene was complete, the studio was required to retrieve the car from the bottom of the cliff as per their agreement with the State of California.