On August 6th, 1945, an American B-29 bomber plane dropped an atomic bomb over the city of Hiroshima in Japan. The explosion killed 80.000 and as the days went by after the explosion, tens of thousands more were killed by the radiation exposure. On August 9th, 1945, the United States once again bombed the town of Nagasaki, in Japan, with yet again another atomic bomb.

After the bombings, World War ll came to an end and the United States government began a very private study. This project was focused on whether nuclear weapons had spread poison into the world and their effects on humans.

The radioactive fallout from that horrific event contaminated 200.000 square meters and 70% of the territories of Russia, Belarus, and Ukraine. It is said the release of radioactive substances was 400 times worse than that of the atomic bombing of Hiroshima. 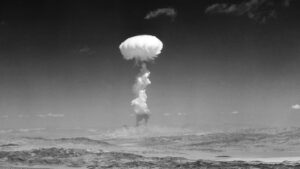 Radioactive fragments can end up on the earth and can contaminate crops, harm wildlife and marine life, affect drinking water, and cause significant dangers in humans.

Early on in the 1950s after Hiroshima, we truly didn’t have enough information regarding the effects of radioactive fallout on humans, which led the U.S. Government to create Project Sunshine.

Project Sunshine was led by Dr. Willard Libby. Dr Libby was an American chemist noted for his assistance in 1949 in developing radiocarbon dating which revolutionized archaeology and paleontology. He was a 1931 graduate of UC Berkeley and later earned his doctorate in 1933. During World War ll, he was involved in the Manhattan project. The Manhattan project assisted in developing atomic bombs.

The United States Atomic Energy Commission worked with USAF Project Rand to create this project and move forward in their study of the effects of radioactive effects on human tissue and growing bones.

At a meeting held by the U.S. Atomic Energy Commission, on January 18th of 1955, Dr. Libby  was the commissioner of the AEC at this time and he stated there was just not enough data as they needed human samples. Especially in children. He actually stated at this meeting, “I don’t know how to get them, but I do say that it is a matter of prime importance to get them and particularly in the young age group. So, human samples are often of prime importance, and if anybody knows how to do a good job of body snatching, they will really be serving their country.”

There were many atomic bombs being tested in and around the United States at this time and Project Sunshine was particularly interested in deceased or living individuals that lived near these test areas to determine the effects and levels of radiation on the population. Particularly concerned with strontium-90 contamination and how it could affect growing bones.

Strontium90 is most possibly the most dangerous element in a radioactive fallout as it can emit radiation for many generations.

It is obvious to all parties involved at this point that the tissue samples needed for testing will not be obtained legally. They were able to obtain stillborns, but once that supply had been cut off, they were left with no other option than to snatch body’s without consent.

With no other way than to steal bodies… that is exactly what they did. It is believed the Atomic Energy Commission  was already obtaining cadavers from across the U.S. illegally. It is said that a British newspaper placed the spotlight on British scientists who were sending children’s bodies, bones and various body parts to the United States for this classified project. Alongside this news report, a British woman had stated that her stillborn baby’s legs were taken off by doctors. They wouldn’t allow her to dress the baby for the funeral so she wouldn’t notice the missing legs.

Vancouver, Canada heavily participated in Project Sunshine, sending over 127 bodies to the United States. The average age of the deceased were 34-87.

B-199 was one of the bodies… He had passed away at the Vancouver General Hospital of encephalitis, though, his body was secretly shipped to the U.S. Laboratories. He was then cremated and his ashes were tested.

It was also reported that more than 1500 bodies of the deceased babies and children were taken from families in Australia and Europe without consent. Throughout the project, over 9000 samples were taken. Some will say they believe up to 6000 cadavers may have been stolen from various locations where they were buried and shipped to the United States.

In 1994, then president Bill Clinton, ordered an investigation into the supposed body snatching of Project Sunshine. The investigation looked into the years of 1944 to 1974 as well as other experiments of this kind. One year later, Clintons Advisory Committee on Human Radiation Experiments concluded that the researchers within Project Sunshine did employ deception when soliciting the bones from the deceased babies and adults.

While the project at the time was intended to save lives and benefit the human race, it seems that theft of our deceased loved ones are not up for grabs simply in the name of science… Was this a noble cause or an unforgivable act by the US Government…