Kuchisake-onna or as most know her, the slit mouthed woman. This urban legend comes from Japanese culture, specifically during the Heian period. 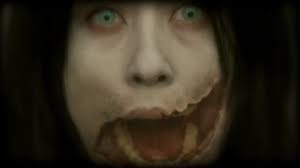 The Heian period occurs during the last period of classical Japan history, during this period, Buddhism and Taoism were at their peak in Japan. The earliest version of the slit mouthed woman legend dates back to the Heian period. Kuchisake-onna was a wife of a samurai, she was vain and loved attention. Legend has it that she cheated on the samurai. He was so angry, he slit open her mouth, cutting it open from ear to ear and then told her no one would want her anymore.Pretty creepy legend, but it does get creepier….. Sometime in the 1970s, people began reporting that there was a woman walking alone at night. She was always seen wearing amedical mask covering her mouth. The stories are all similar, the woman asks a traveller if they think she’s pretty, if they respond, ‘No’, legend has it that she either kills the person or cuts their mouth just like hers. If her victim responded, ‘yes’, she would then remove her mask and ask them, ‘how about now’ ?The confused victim might respond no to the second question and she would promptly kill them by slashing their mouth open. It is said the only way to escape death by the Kuchisake-onna is to answer yes the first time and yes the second time, this makes her pause to understand why anyone would say yes, which gives you the ability to flee!In 1979, a panic spread… a woman with a slit mouth, was chasing children around and creating wide spread panic and fear. No actual reports have been found regarding a woman chasing children or killing people… On the web, there are some websites reporting that a coroner identified a woman in 2007 matching the slit mouthed womans description, this woman supposedly had been hit by a vehicle. There are no solid reports or documentation of this. There are many movies, novels and manga covering the Slit Mouthed movie.. here’s a few we’ve found so far :Carved: The Slit-Mouthed Woman (口裂け女, Kuchisake-onna) is a 2007 Japanese horror filmKuchi-sake Onna – MangaCarved 2: The Scissors Massacre a.k.a. The Slit-Mouthed Woman 2Some often mistake Kuchisake for the Yurei, which is similar with long black hair that conceals a horrible smile, but that….. is a whole different story! IF you’ve found yourself chased by a woman in a mask… tell us about it in the comments below!

5 thoughts on “Slit Mouthed Woman is a Japanese Urban Legend”