Keith Rylance and his wife Amy Rylance were developing a property alongside their business partner Petra Heller. The property would become Whispering Winds Winery, in Gundiah, a town within Queensland, Australia. None of the three would have ever assumed they’d be the center of one the most fascinating alien abduction cases in the twenty-first century.

On October 4th, 2001, Keith Rylance who was 39 years old at this time, had retired for the night into the main bedroom, around 9:30 pm. Due to the development of the property, the three had created temporary annexes around the property to live during the development. Keith would have been in the main bedroom of the annex. 35 year old Petra Heller, business partner and friend to the Rylance’s would be in another bedroom. 22 year old Amy Rylance, remained in the lounge area of their annex. This area was settled between both bedrooms. Amy stayed up listening to the storm that had rolled in with intensity as well as to watch some television. The combination of the intense storm outside and the lull of the television, Amy drifted off to sleep on the sofa.

Trying to understand what she was seeing, Petra ran towards the open window in search of the source of the beam. What she found upon looking out of the open window, was a disc-shaped object hovering above the trees. Then, suddenly… Petra fainted.

Once Petra became conscious again, she screamed and alerted Keith. The two began to search for Amy, but found nothing, except an open window, ripped screen, and items on the floor that were once on the coffee table. Keith went outside onto the property frantically searching for his wife.

Finding nothing, Keith went back to the annex to talk with Petra. Though Keith was skeptical of Petra’s account of the events, he could not make sense of the scene in any other way. Nor could he locate Amy. Keith continued searching the property, but by 11:40 pm it was clear he needed to contact authorities. Calling the Tiaro Police Department, Constable Robert Marangna accompanied by another officer, arrived at the Whispering Winds Winery.

Officers weren’t sure what to expect when arriving at the winery, though, while on the property, officers conducted a thorough search of the property and surrounding land finding nothing, other than a window screen that was torn from top to bottom as well as at the bottom. Authorities took samples from the torn screen and found a flowering bush near the left side of the window that appeared to have suffered burns to it’s right side from some type of extreme heat. The particular bush was known as a ‘Yesterday, Today and Tomorrow’ plant, known for it’s beautiful flowers.

Keith answered the call and began to speak to a woman who stated she was calling from the town of Mackay, which was 500 miles away. An eight hour drive from the Whispering Winds Winery. She stated that she had found a woman near a petrol station who was disoriented, confused and severely dehydrated. She took the woman to the hospital and after learning her identity, she called Keith. The disoriented woman… was Amy.

This call came in 90 minutes after Amy went missing.

Keith was confused and overwhelmed with questions. How had his wife travelled so far away in such a short time. He handed the phone to Constable Marangna. This is how the incident became the Gundiah-Mackay Affair.

While Amy was in the hospital in Mackay, authorities questioned her and the doctors examined her and her statements were later placed onto an official record.

Amy stated to authorities that all she could remember was laying on the sofa and falling asleep. Her next memory was being in a rectangular room, laying on a bench. The room was illuminated with light, but she was unable to detect the source of the light.

Quickly looking around, she believed herself to be alone in the room. Though to be sure, she yelled out to see if anyone would respond. A response came in a male voice. The voice told her to remain calm and no one would harm her. 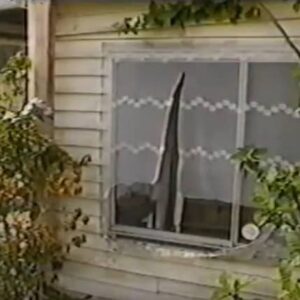 Amy went on to describe an opening in the wall of this strange room and a six foot tall man entered the room. He was wearing a one-piece bodysuit covering him from head to toe.

He wore what appeared to be a mask on his face, with cut out holes for his eyes, nose and mouth. He spoke to her telling her everything would be ok. Amy stated that she felt as if she’d been here for a significant amount of time. The man in the bodysuit told her she’d be returning to a place not far from where she was taken.

The next memory Amy has is waking up on the cold ground. She realized she was in the forest, surrounded by trees, but not far from the ocean. Feeling disoriented and not knowing where she was, she could smell the ocean. Amy struggled through the bushland until she came upon some bright lights. It was a petrol station.

Amy made her way to the service area and the staff quickly realized she needed assistance. Extremely dehydrated, she slowly sipped water and began feeling slightly better.

At this point, she could not remember her name, address or much else. The woman that had called Keith… She was here at this time and took Amy to the hospital.

Amy told authorities she had never experienced anything like this before, though when she was a child she had seen a very large UFO that had been surrounded by smaller objects. Authorities were mystified and asked her to sign an agreement that would allow her to be prosecuted if she were lying.

Keith and Petra were on their way to the hospital at Mackay, though it was a very long 8 hour drive. Local police booked Amy a motel room for the evening to wait for her husband and friend.

On October 5th, the three were reunited in the small motel room. They sat together and created a timeline of the events. Each giving their own account based on their experience.

Amy found multiple triangular patterns on on her inner right thigh and each of her heels. Her hair had grown out considerably, which was disturbing as she had just had her hair dyed blonde just a few days earlier. To have the roots of her hair already distinctively showing made the three wonder about how time moves on earth versus on a UFO. The hair on her legs also showed considerable growth.

During their short time at the motel, the three began to research and learn more about alien abduction and UFOs. In their research they discovered Diane Harrison at the Australian UFO research network. They shared the events of the last 24 hours with Diane Harrison and she shared this info with a colleague, Bill Chalker. Chalker was more experienced with the solid light effect they had witnessed. He called the three and recorded their discussion.

Keith thought it would be best to contact the media with their story, but Bill Chalker disagreed. He cautioned them not to do this. Dianne Harrison and Bill Chalker decided to meet with the trio at the motel, but before arriving would stop by Whispering Winds Winery to view the site of the abduction.

The researchers arrived at the winery on the evening of October 9th, near 10 pm. They stayed in one of the annexes for the night. During their visit to the winery/Rylance property, the researchers observed the behavior of the dog and felt it was odd.

It continuously would jump at the window that Amy had floated out of. They also spoke to the Gundiah police. These local authorities suggested that the three had made it all up as a hoax.

By the time the researchers arrived in Mackay, to see how the three were doing, they realized that they had checked out of the motel. Voicemails were sent, but never returned.

After a day or so, Keith finally called the researchers back. He claimed they had to leave and go to a secret location, as “Men In Black” had been following them for days.

Keith, Amy and Petra had been followed by a dark brown 4 wheel drive utility van. Apparently, this van had attempted to run the trio off the road.

The whereabouts of Keith, Amy and Petra are unknown. Some believe they are living in England.

This case became controversial as many speculated on Keiths intentions. Keith tried to restrict how the researchers could look into their case. Keith had also stated to investigators that he did not feel the incident needed to be proven.

Authorities always had trouble believing the story of alien abduction as they found items that steered their belief in the opposite direction. On the Whispering Winds property, authorities found the burnt remains of flood lights, paper towels, black hair dye, and electrical wiring in an incinerator near the annex in which the three stayed. There was also a notebook found belonging to Petra with Scientology references.

By March of 2003, an investigator was contacted by an overseas individual and was told this affair may have had something to do with a Scientology mission. The mission was to find a buried spaceship. Investigators recalled the notebook found on the property. Police and researcher Bill Chalker had noted specific words found in the notebook, such as ‘Thetan’.

Thetan in the Scientology beliefs represents the source of life.

One last uncanny detail that emerged… The Whispering Winds property that Amy was abducted from… L. Ron Hubbard, the creator of Scientology, lived out his last days in 1986 on a property in the U.S. named… Whispering Winds.

Was this an actual alien abduction? Or was this a Scientology mission gone wrong? I suppose this is just left to the Realms of the Unexplained…