Amityville is a village located in the town of Babylon. The town of Babylon resides in the county of Suffolk, New York. In such a small village such as Amityville, not much is reported… Though one house within this tiny community became the subject of several murders and possible haunting.

112 Ocean avenue was built in 1927. The beautiful home consisted of three stories, five bedrooms, three and a half bathrooms and a basement. There is nothing to report in the years before the DeFeo family moved in. No strange occurrences or hauntings.

While the house had no major issues, the DeFeo family had some very dark secrets. Ronald Joseph DeFeo Sr. was born to Rocco and Antionette DeFeo on November 16th, 1930. Ronald Sr. was described as a very suave and cool kind of guy when he met future wife Louise Marie Brigante.

Louise was born to Michael and Angela Brigante on November 3rd, 1931. With her natural beauty she desired a career in modeling. Though after meeting Ronald Sr., those plans changed quickly as the two shared a whirlwind romance that led them to marriage. Louise’s family disapproved of the marriage and Louise cut all ties with her family, until their first child was born. Ronald Jr. was born on September 26th, 1951 and was often referred to as Butch. As the first born child and son, his father piled more responsibility on him and at times his discipline of Butch crossed the boundries of typical discipline and into cruelty.

Ronald Sr. was hot and cold with his son. Sometimes hugging him and other times throwing him across the room. Growing up, Butch DeFeo had it hard. Because Butch was the first born and a boy, his father expected more from him. And Big Ronnie was not afraid to discipline Butch in the cruelest fashion. One minute, he would hug his son; the next minute, he would throw him across the room.

Louise’s brother Michael Jr. had witnessed two year old Butch be slammed into a wall by his father, injuring his head. During Butch’s childhood he was picked on and teased at school. Primarily due to his weight, Butch had become extremely overweight. In his teen years, he began using amphetamines heavily, causing him to lose weight.

After Marc was born, Louise left Ronald Sr. no one knows the exact reason why, but Ronald Sr. was desperate to get her back. He wrote a song called, “The Real Thing” and asked Jazz artist Joe Williams to record the song in 1963. Joe agreed and included the song on his album, “One is a Lonesome Number.”

This gesture of love won Louise back and by October 24th, of 1965, the couples third son, John Matthew DeFeo was born. With a growing family, more space was needed. This would be when the DeFeo family moved out of their Brooklyn apartment to the South Shore of Long Island to the small community of Amityville.

With some help from Louise’s family, the couple bought the beautiful home on 112 Ocean avenue. The home had two quarter-moon shaped windows facing out to the street, they looked like the eyes of the home. In the front yard, a sign was posted, it read, High Hopes, behind it, were statues of children praying and a St. Joseph holding a baby Jesus.

The home sat in a strange way, facing sideways. This placed the front door facing the long driveway. The home had a 237 foot boathouse that sat at the end of the long driveway, it sat on Amityville Creek.

Early on in the home, Ronald Sr. wanted his family portraits to be life size and displayed in their beautiful new home. Once again Louise’s family assisted financially with this project. The life size portraits, encased in gold frames, were hung on the wall of the staircase between the first and second floors.

By the year 1974, things had gone horribly wrong in the DeFeo home. On November 13th, 1974 the patrons of Henry’s Bar witnessed Ronald DeFeo Jr., Butch scream that his parents had been shot. The little tavern was located on the corner of Ocean Avenue and Merrick Road, not far from 112 Ocean Avenue.

Butch’s best friend Bobby Kelske was out of work and in the bar that day. Bobby immediately ran to Butch who had now fallen to his knees and crying hysterically. Butch was screaming to Bobby, “you got to help me, someone has shot my mother and father.”

Bobby’s response was, “are you sure they’re not asleep.”

Butch had gotten to his feet and asked Bobby and a few others from the bar to come to the house with him. Bobby, John Altieri, Joey Yeswoit, Al Saxton and William Scordamaglia, the owner of the bar all jumped into Butch’s 1970 Blue Buick Electra 225 with Bobby at the steering wheel and Butch in the back seat.

Frantically driving to get to the DeFeo residence one block away they arrived in seconds.

Bobby jumped out to run in the home and others stated that someone could still be inside, but Bobby didn’t care, he opened the unlocked door and entered the DeFeo home. The only sound in the home was the barking from the dog.

Crossing the marble foyer into the dining room that contained red velvet textured wallpaper. At the dining room table hung a grand chandelier, an open textbook sat on the table nearby wilting roses.

The DeFeo family had quite expensive tastes. Throughout the home you may find paintings, statues, satin covered chairs. While looking around downstairs, they find nothing significant.  Bobby leads the five men up the stairs he is very familiar with the home as he had visited it many times over the years to visit with Butch.

When reaching the second floor, the men were overpowered by a strong odor… of death.

Arriving at the master bedroom, Bobby turns the light on and finds Ronald DeFeo Sr. 43 and his wife Louise, 42. Ronald Sr. has dried blood coming out of a wound, he lay face down in only a pair of blue boxers. Louise’s wounds couldn’t be seen at this time as she was hiding under a blanket.

Bobby began to feel ill and the other men helped him back downstairs. John Altieri remained on the second floor to look around. Entering a bedroom with wallpaper that displayed eagles and cannons, he saw items that seemingly belonged to young boys and upon further inspection he found the bodies of two young boys both face down just as their parents had been found. Both with what appeared to be a  gunshot wound to their backs.

Authorities were called and it was determined that Ronald Jr. shot his parents each twice in the back and shot all siblings once each in the back. Further physical evidence indicated that Louise and daughter Allison, were awake during their death. 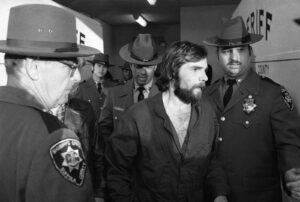 Ronald DeFeo Jrs., trial began on October 14th, 1975. During the trial, his defense lawyer, William Weber used an insanity plea, claiming he killed his family in self-defense because the voices told him the family was plotting against him. DeFeo’s psychiatrist supported the insanity plea, though, the prosecution’s psychiatrist stated that DeFeo was a heavy drug user, often using LSD and heroin and was aware of his actions at the time.

During the police investigation and trial, a few inconsistencies were brought forward. All six victims were face down with no sign of a struggle. DeFeo used a .35 caliber lever action Marlin 336C rifle for the murders. The investigation concluded that the rifle did NOT have  any sound suppressor. There was also NO evidence that the family had been sedated.

In Butch’s original confession he stated he drugged his family, though toxicology proved that to be untrue. Neighbors stated they never heard any gunshots at that time but had heard the dog barking.

Ronald DeFeo Jr., was found guilty of six counts of second degree murder and on December 4th, 1975, he was sentenced to six sentences of 25 years to life.

It was known to most that Butch and his father had a terrible relationship, but no one is sure that was enough motive to kill. Though some speculate that maybe he intended to collect the life insurance for his parents?

During the time Butch was incarcerated he interviewed for many networks, and media outlets. During a 1986 interview he stated his sister Dawn killed their father and his mother was distraught and killed all of his siblings. He then stated he had no choice but to kill his mother then. Claiming that he took the blame because he did not want his mother to look bad to her father Michael Brigante Sr.

Butch also went on to say that his father’s uncle was part of a major crime family and indicating that this had something to do with the murders. Later changing his story once again and stating he was married to a woman in New Jersey when his mother called him to break up a fight between Dawn and their father. There were so many different stories, thus far, no one truly knows what Butch’s motives were.

Ronald DeFeo Jr., or to some, Butch died on March 12th, 2021 while serving his sentence.

The DeFeo home was sold about 13 months after the murders to the Lutz family. The Lutz family only resided in the home for 28 days, claiming the home was possessed and extremely haunted. This spawned the movie ‘Amityville’. Though there isn’t any actual evidence showing the house to be haunted. In the book and movie there are references to a man named John Ketcham who lived in the area but in the 17th century… claims are made that he practiced some type of dark divination causing the home to be possessed. There is no actual proof of this man in that area, being a real person.

The Lutz family claimed there were odd smells, sounds and chilling air in the home. And also claimed that a priest came to bless the home and was slapped by an invisible hand.

Was the home at 112 Ocean Avenue possessed or haunted after the murders of the DeFeo’s? Was Butch suffering from a mental illness, possession of something evil or a drug induced rage? We may never really know and will leave it to the realms of the unexplained…