The Jersey Devil, not to be confused with the New Jersey Devils hockey team is a legendary creature that has haunted the Jersey area for close to 260 years. Nearly 2,000 witnesses have claimed to have encountered the creature over time. This mythical beast originated from folklore in the Pine Barrens area of New Jersey, though, there are many versions of the lore, they all seem to describe the same monster…

One of the first tales I came across talked about a woman by the name of Jane Leed who is also referred to as Mother Leeds. She resided in Pine Barrens, New Jersey and was overwhelmed by her existing 12 children. She became angry upon learning of a 13th pregnancy. She cursed her pregnant belly wishing this next child would be a devil. One dark and stormy night, the child was born and immediately morphed into a creature with a goat’s head, bat wings and hoofs, it screamed and killed the midwife that had performed the birth and all others in the room, then flew out the chimney, never to be seen again… In 1740, it was reported that a local clergyman exorcised the demon and banished it for 100 years.

While that myth was almost all fantasy, there were some small facts within it and that is an even larger story that involves Benjamin Franklin and one of the earliest known political feuds…

It all starts with Daniel Leeds, who comes to America in 1733 and settles. Daniel was a Quaker and a very prominent individual in the area. Though when Daniel publishes an Almanac containing references to astrology his own congregation ridiculed him and destroyed the Almanac. Quakers followed Christian beliefs and denounced anything that the pagans believed in. Quakers refused to use the names of the days of the week, Sunday, Monday, etc., because they believed it to be a pagan tradition. And Quakers never celebrated Christmas as they once again believed it to be a Pagan tradition.

Daniel continued to publish his work and went on to write a satirical series based on the Quakers further fueling the fire. Daniel Leeds furthered his knowledge in Christian occultism,  which eventually led the Quakers to deem Daniel Leeds as Satan.

When Daniel Leeds’ son, Titan, takes over the Almanac in 1713, he becomes entangled in a feud of his own, with Benjamin Franklin. Franklin and Leeds spiral into their long running feud, leaving the Leeds family with the title, “Political & Religious Monsters”. Titan Leeds and his Almanac would now have to compete against Franklin’s Almanac. Leeds continued the use of astrology in his almanac, which Franklin found quite funny and began using a bit of satirical astrology in his own almanac poking fun at Leeds and implying that astrology had predicted Leeds death. Titan Leeds was outraged and called Franklin a ‘fool’ and a ‘liar’, and was obviously alive to do so, but this just humored Benjamin Franklin and he began calling Leeds a ‘ghost’ and mockingly implied that Leeds was dead and writing his almanac from the grave. 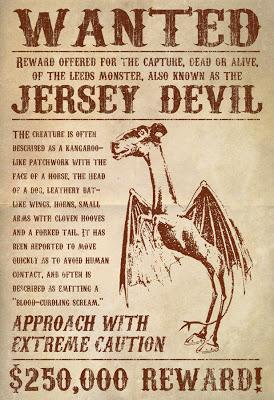 While that played out over years, in 1728, Titan Leeds began to publish his almanac with his family’s crest. The creature on the crest was said to be a wyvern. A wyvern is described usually as a winged serpentine creature with legs, claws and no arms. It looks a bit like a bat crossed with a dragon.

Benjamin Franklin was determined to make his almanac titled, Poor Richard’s almanac, famous. Franklin wrote the almanac under the pseudonym, Richard Saunders or at times just, Poor Richard. Continuously stating that Leeds was dead and must have been  resurrected from the dead to write it. This shed poor light on Titan Leeds almanac titled, The American Almanac. Titan Leeds passed away in 1738. It’s a belief that the tale of the Jersey devil was created throughout the feud between Leeds and Franklin.

It’s possible that the birth of the Jersey devil myth, lies in the combination of  Daniel Leeds wife birthing many mentally disabled children, his belief in christian occultism and astrology and later his son Titan adding a wyvern on the family crest.  Could this be what created the legendary creature… The sightings of the Jersey Devil often resemble the description of the Wyvern on the family crest.

The lore eventually faded but never completely. In current times, we see ghost hunting programs searching for the Jersey Devil and hockey teams using the name and in 2018, an entire festival was created, named the Jersey Devil Festival, it was located in Asbury, New Jersey.

We may never truly know if there is a winged creature flying around New Jersey or whether this a true hoax created and fueled by political rivals. We will just leave this one to the realms of the unexplained…