2020 was a difficult year for just about everyone. Though I was definitely blessed to have escaped any major issues for the majority of the year. Though, that wasn’t to be how the year would end… At the very end, I suffered a huge, sudden loss within my family. Of course I took to scrolling through material for the show to help cope and I stumbled across some amazing Bigfoot stories, Bigfoot protecting a 3 year old overnight in a cold forest, or a fisherman catches Bigfoot sunbathing, all great stuff to keep your spirits up! Obviously there were phone calls from close family and great friends with condolences… It’s the love you receive from those around you that pull you through a difficult time. Since it’s still quite difficult to return that love, I will do my best in little ways. Soo, this episode, about Bigfoot, is dedicated to a wonderful long time friend… Happy Birthday, Miss Dani… Here’s to a better new year, lots of love to you my beautiful friend!

If you’ve never heard of Bigfoot, you’ve probably been living under a rock. Most would describe Bigfoot as an ape-like creature that dwells in North American forests. This creature is oftentimes referred to as Sasquatch. Typically Bigfoot isn’t described as a vicious creature, but rather large in size and at first sight can be quite terrifying.

Pop Culture oftentimes depicts this creature as confused and even warm and loving. For example, the 1987 movie, “Harry and the Henderson’s’. In this family friendly movie, the Henderson Family accidentally hits the friendly sasquatch with their car. Unsure what to do the family takes the apparent dead creature home, only to find he is alive. The family adopts the beast and this Bigfoot and becomes a bit of a house pet.

Though not all depictions of this creature are as positive. Some Native American tribes describe Bigfoot as a malevolent beast whose goal is to attack humans. Not all Native American tribes believe this, but those that do, also believe he steals children, brings danger to them and may even seek to eat humans.

Tribes that believe this refer to the monsters as Stick Indians, who engage in warfare with surrounding tribes. Stick Indians are described as hairy bigfoot like monsters who live in the forest. These creatures are said to have powers. Their powers include, the ability to hypnotize, paralyze, and even cause insanity in humans. Some also believe the Stick Indians to lead humans in the wrong direction within a forest, by whistling.

Whatever version of bigfoot you believe, the mining party that was attacked in 1924, believed the creature to be evil.

This attack was called the Ape Canyon Attack. In July of 1924, five miners camped in a gorge on Mount St. Helen. During their week-long stay, the group had come across abnormally large footprints and in the evenings, they would hear whistling through the area. The whistling sounded as if two creatures were communicating. 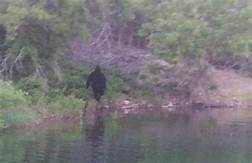 One day, a member of this group, Fred Beck, spotted a bigfoot and shot at it as he was frightened by the large creature.

Later that evening, the bigfoot like creature came back to the miners cabin with other identical creatures. The miners were under attack! These large, hairy creatures began throwing boulders at the small cabin.

The miners described these creatures as 7 foot tall beasts covered in long black hair. They believed the creature to weigh at least 400 lbs.

The creatures kicked at the door and climbed on the roof of the cabin. While on the roof the bigfoot creatures began dropping rocks inside a hole they made within the roof. One of these rocks reportedly hit Fred Beck in the head.

The miners had multiple guns in their possession and held their ground throughout  this terrifying night.

When morning came, the creatures retreated into the forest. The 5 miners quickly escaped and began to tell their story. The particular gorge that they camped in was now referred to as Ape Canyon. 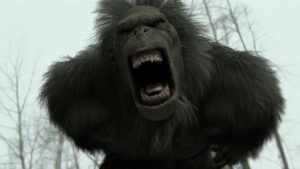 In 1967, Fred Beck, with the help of his son, Roland, created a memoir of the 1924 attack. He titled his book, “I Fought the Ape-men of Mt. St. Helens”. Within his book he clarified details that had been reported falsely by the media. Fred claimed he was not the one who shot at the Bigfoot, but it was his friend, Hank. He also stated, he was never actually hit by a rock that had come through the roof of the cabin.

Almost everyone believed the miners’ story. Though there was one man who claimed none of it was real, because he faked the entire incident.

82 year old Rant Mullins, appeared on national television in 1982, stating he had created the bigfoot prints with large wooden feet he had constructed. He also stated that he had rolled boulders on to a small cabin in the area in 1924.

Mullins being a long time resident of the area stated he had never seen any evidence of bigfoot being in the area nor had he ever laid eyes on one.

While he was never polygraphed, he swore his statements were true. Rant Mullins also believed that the majority of sightings were related to the prints he would make with the large wooden feet he had created.

The question is not whether you believe in bigfoot… You wouldn’t be here if you didn’t. The real questions are, was the ape canyon attack real or an awful joke created by Rant Mullins?

And finally… do you believe bigfoot to be passive or a malevolent being…. I suppose we leave this to the realms of the unexplained.