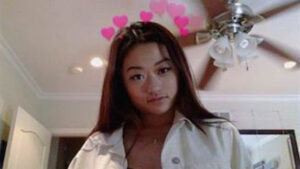 On September 24th, 1996, the world welcomed Elaine Park. Born in La Crescenta, California, she grew up in a two parent household. Elaine and her mother Susan Park were quite close. Her childhood was normal with nothing much to report, but by the time she began high school, Elaine began to blossom into an outgoing, spunky teen.

With a large circle of friends, Elaine went on to be a cheerleader at La Crescenta High School and later joined various dance companies to perform musical theater and dance as well as her school’s theater program. Friends would describe Elaine as outgoing and always smiling. Though after her parents divorce, she began to struggle with bouts of depression. Visiting parents in two different households became stressful at times.

Despite the struggle to cope with her changing family dynamics, Elaine dreamed of being a successful actress one day and had already begun appearing in roles on television and movies.

You can find Elaine in the movies, Crazy Stupid Love and Role Models as well as tv shows, Desperate Housewives, ER and Mad TV. After high school graduation Elaine enrolled at Pierce College in Los Angeles, though after some time she felt college just wasn’t for her. Around this same time she was laid off from her restaurant job.

During this time Elaine had also been dating a young man named Divine Compere, though the relationship seemed to be off and on and not very stable. Many would say that the couple would break up, then get back together and this was a continuous situation.  Divine Compere often went by the nickname Div, is the son of Shakim Compere, a well known businessman in Los Angeles. Shakim co-owns Flavor Unit Entertainment with super star, Queen Latifah.

The last place Elaine was seen was at the Compere’s residence in Calabasas, California. Their home is located in an area called Dark Canyon in Calabasas, it’s very heavily guarded as well as gated.

On January 27th 2017, Elaine asked her mother for $20.00 and promised to pay her back, then left in her gray Honda Civic to see Div. The night of January 27th, Elaine and Divine took an Uber to see a movie and arrived back to his house after 1 am. Security cameras recorded the two leaving the home and returning to the home. Nothing appeared to be amiss from what we can see on the footage. The two returned walking past the cars and into the home.

The next sighting of Elaine on the camera is at 6 am. She is leaving Divines home and heading to her car that’s parked out on the street. She doesn’t appear to be in any distress, she simply walks to her car, never to be seen again.

In the camera footage some speculate that after she unlocks her car, which causes the lights to flash, it appears another car’s lights flash as well.

What occurred in the home after they arrived from the movies at 1 am, is even more peculiar. Div was questioned by authorities after Elaine went missing and he stated that Elaine woke up at 4 am having what appeared to be a panic attack and that she was singing, shaking and having a hard time breathing. He stated she wanted to leave, but he persuaded her to stay, but ultimately she leaves at

6 am. Driving out of the gated community never to be seen or heard from again.

The security footage of Elaine’s car driving away cuts out at 6:05 am and records nothing further.  Elaine’s mother wasn’t too worried when she didn’t come home the next day, though she became concerned when Elaine didn’t respond to her texts or phone calls. Elaine and her mother communicated regularly, so Elaine’s silence was unsettling. Her social media presence was also missed as Elaine was a heavy user of social media. 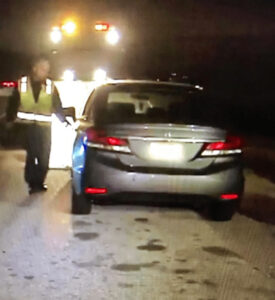 Elaine’s family were not able to file a missing persons report for 48 hours after she went missing. Five days went by without a word from Elaine, then a break came on February 2nd 2017. Elaine’s car was found along the Pacific Coast Highway in Malibu, California. There were no signs of a struggle and all her items were in the vehicle, including the keys. Among the items were a laptop, cell phone, makeup and her cash.

Though the family has confirmed the only item that was not found in the car was her favorite gold necklace with the letter E in rhinestones.

Some will say the investigation or lack thereof, is really the problem. Since Divine cooperated, authorities had no reason to suspect him of anything else and did not search his home.

It’s been said that her mother has hired a private investigator with money raised in the community.

Elaine is of Asian/Korean descent. She is approximately 5’5 and 125lbs. She was wearing a white sweatshirt, denim shorts or possibly gray sweatpants. She also may be wearing her necklace with the E on it.

She has the following tattoos: a dagger and flowers on her right arm, a rose on her left shoulder and a cow skull and a moth on her left arm. Elaine’s ears and nose are pierced, and she wears heavy makeup and mascara. At the time of her disappearance, her hair was waist-length and had blonde tips.

If anyone has any information regarding Elaine Park, contact Los Angeles Crime Stoppers at lacrimestoppers.org or 800-222-8477  Or the Glendale Police Department at 818-548-4911 Let’s help bring Elaine home!