“Spontaneous human combustion” is believed to start within the body of the victim….

Well, don’t let this story ruin your weekend plans…. but the earliest cases of Spontaneous Combustion were blamed on alcohol. SHC was more relevant in the 1800’s and almost always affected a female who had been drinking and had not come into contact with an ignitor.

In 1984 a forensic scientist began researching this troubling affliction. Almost all cases of SHC involve persons with low mobility due to advanced age or obesity, along with poor health, most would have been unable to move quickly if they had caught fire. It is assumed that these fires are not starting internally, they must be caused by an ember from a cigarette or spark from a candle.

While there is very little evidence as to why human combustion occurs, there are some great combustion stories we’ve found along the way! 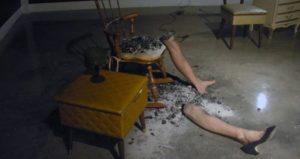 On July 2nd, 1951, Mary Reeser, a 67-year-old woman, was found burned to death in her house after her landlady realized that the house’s doorknob was extremely hot. The landlady notified the police, and upon entering the home, they found Reeser’s remains completely burned into ash, with only her lower legs remaining. The chair she was sitting in was also destroyed. During the investigation, detectives found that Reeser’s temperature was around 3500 degrees Fahrenheit, which puzzled the investigators due to such hot temperatures leaving almost all the room Reeser was in intact. Reeser was a user of sleeping pills, as well as a smoker. A common theory was that she was smoking a cigarette after taking sleeping pills, and then fell asleep while still having a lit cigarette, which would have burned her gown, leading to her death. Investigators also found that the fire had burned a socket, which stopped a clock at 2:26am, which states that Reeser had been burned at around that time. (from https://en.wikipedia.org/wiki/Spontaneous_human_combustion)

Henry Thomas, a 73-year-old man, was found burned to death in the living room of his council house on the Rassau estate in Ebbw Vale, South Wales, in 1980. His entire body was incinerated, leaving only his skull and a portion of each leg below the knee. The feet and legs were still clothed in socks and trousers. Half of the chair in which he had been sitting was also destroyed. Police forensic officers decided that the incineration of Thomas was due to the wick effect. His death was ruled ‘death by burning’, as he had plainly inhaled the contents of his own combustion. (from https://en.wikipedia.org/wiki/Spontaneous_human_combustion)

In December 2010, the death of Michael Faherty in County Galway, Ireland, was recorded as “spontaneous combustion” by the coroner. The doctor, Ciaran McLoughlin, made this statement at the inquiry into the death: “This fire was thoroughly investigated and I’m left with the conclusion that this fits into the category of spontaneous human combustion, for which there is no adequate explanation. (from https://en.wikipedia.org/wiki/Spontaneous_human_combustion)

In August 2013, Rahul, a two and one half months-old infant from Tamil Nadu, India, was admitted to the Kilpauk Medical College and Hospital in Chennai, having four reported burn injuries since birth. Initial tests ruled out any abnormalities, and further results led the hospital to conclude that it was not spontaneous human combustion.The baby’s mother used to live in another village which had come in the news in 2004, when residents had complained that their homes spontaneously burst into flames. Investigations had shown that phosphorus hidden in cow dung had been present in the huts; phosphorus has a low ignition point and can cause fires.

In January 2015, Jayaramachandran, Rahul’s younger brother, suffered 10% burns, claimed to be due to spontaneous combustion. However, doctors at Kilpauk Medical College Hospital have reported the claims as suspicious. When interviewed about the cases, the physician who treated the older brother in 2013 stated that “[t]here is no such thing as spontaneous human combustion. When Rahul was admitted to the hospital last year we clearly told the parents that it looked like someone was deliberately setting the infant on fire. (from https://en.wikipedia.org/wiki/Spontaneous_human_combustion)