Guanajuato, Mexico is known for its silver mines. As a matter of fact one of it’s mines, La Valenciana produced 30% of the world’s silver for over 250 years. While silver mining has slowed over the years, La Valenciana is still operating today.Guanajuato is home to many mines and some are even tourist attractions. This charming town has cobblestone streets and breathtaking architecture, definitely a cute vacation destination! Though… It is also home to the museum of real mummies…In the past 200 years, Cholera outbreaks have occurred all over the world.

It’s an infection of the small intestines created by a bacteria. Symptoms can start two hours after exposure and up to five days after. There have been seven pandemics based on the Cholera outbreaks which all subsided in the 1970’s. Though occasionally we see small outbreaks when there is civil unrest or a natural disaster which can cause food or water to become contaminated with the bacteria.

In 1833, Mexico battled with an outbreak of Cholera, with a poor understanding of the illness at this time, so many lives were lost. As the Cholera epidemic raged through Mexico, more cemeteries had to be opened to assist in burying the diseased bodies and at times, bodies were buried in a mass grave. Some were rumored to have been buried alive. Ignacia Aguilar was one of those individuals. Ignacia suffered from a strange ailment. Her heart would appear to stop on different occasions. 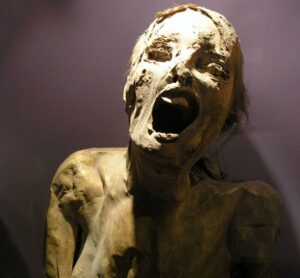 During this time it stopped beating for more than a day. It was believed she died and she was buried. By 1851, the Cholera epidemic had ended and the souls lost were now at rest, but their peace wouldn’t last, as the government began charging tax on the burial grounds by 1865. A five year fee for maintenance of the dead. Many of the poor within the region were unable to pay this tax and some had no remaining family to pay… Their bodies were exhumed from the ground for lack of payment and placed in a building.This occurred in all cemeteries, including the Santa Paula cemetery. The bodies that were exhumed from this cemetery appeared to be mummified due to weather and soil conditions as well as some laid to rest in air tight crypts. The bodies dehydrated and became mummified. Some still bearing the clothes they were buried in and some still had hair. The first body to be exhumed was Dr. Remigio Leroy, a French traveler who was laid to rest in the Pantheon of Santa Paula in the city of Guanajuato. He was placed in a building for storage. As more bodies began to be exhumed and placed in the building, cemetery workers began to charge people a few peso’s to enter and view the building where the mummified bodies were kept and eventually the museum became one of the area’s largest tourist attractions.Remember, Ignacia? With the heartbeat that would stop? She was also exhumed and it had appeared that she was buried alive. With her arms over her head and scratches on her face, it would appear she woke and became panicked. It also appeared that she had bitten herself and blood remained preserved as well. Researchers believe that her actual cause of death was lack of oxygen.By 1958, a law was passed stopping the bodies from being exhumed from their graves, though the museum still holds over 100 mummies of the original, male, female, all ages, including infants. Their deaths range from stabbings, to drownings and a 6 month old unborn baby who died after its mother passed from cholera. 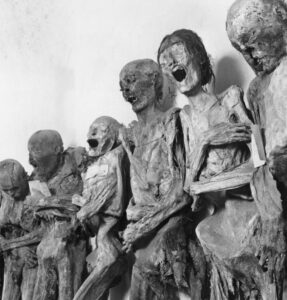 Some days after the museum is closed, security reports hearing footsteps, babies crying, voices and even seeing shadowy figures throughout the museum. While the sounds and shadows are terrifying themselves, there is one mummy who is believed to be cursed. Her name was Carmen and in life, she was accused of being a witch who had made a deal with the devil to give up her soul for eternal youth. Carmen was buried alive. Like most of the other mummies, Carmen was buried in the Santa Paula cemetery and later exhumed and placed in the Guanajuato museum. Once on display, staff noticed she did not remain in her case. They would find Carmen in various places in the museum outside of her display. Eventually, they placed chains around the display to assist in keeping Carmen inside. It was always said that if you ever visited Carmen at the museum, you should never look her in the eyes or she will curse you. Some people report leaving her display with scratches.

Though, in more recent times, Mexican authorities have now stated the legend of the witch is most likely untrue and Carmen deserves a dignified burial.

Do you think the museum could be full of spirits from the mummies on display? I’m not sure… I guess we will just leave this to the realms of the Unexplained…