It’s not abnormal to hear stories of haunted houses, bars, stores, and sometimes even haunted dolls, but it’s rare that you hear of a haunted road. We’ve found a stretch of a Hawaiian highway is said to be extremely haunted. It is a particular bend or corner of the Nuuanu Pali Drive that previously connected Kane’ohe to Honolulu. Now the two are connected by Hawaii Route 61. This stretch of road received its name from Dr. James Morgan, his villa was built on the inside of the bend of the road during the 1920’s. Obviously, the road bends and curves in a way that cause one to enter from the north and exit to the east which lends to the name,’Corner’.  On the opposite corner, lived Therese Wilder. Therese was a widow, she lived at 3939 Nuuanu Pali Rd, it is said that once you arrive at that address, you are at Morgan’s Corner, which is now the location of a gated community.On March 11th, 1948 Therese Wilder was murdered in her home at Morgan’s Corner. 21 year old John Palakiko and 20 year old James Majors escaped a prison work crew in the area. On March 10th, 1948, these two criminals moved through the area in search of supplies, and burglarized homes in Therese Wilder’s neighborhood. During their hunt for supplies, they became hungry and could smell Therese Wilder’s cooking so they headed to her home to burglarize it and eat. The two criminals attacked Therese, breaking her jaw, then bounding and gagging on her bed while they ravaged her home and ate her food. Being gagged with a broken jaw caused her to suffocate and die. On March 16th, the gardner, Isabelo Escalante and the maid Miya Matayoshi found Therese Wilder dead in her home. 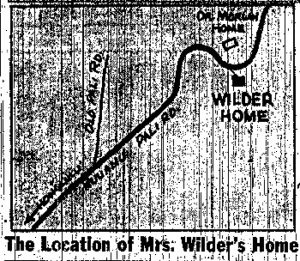 After murdering These the two criminals attempted to steal a vehicle to leave the area on March 12th, but were captured. After their capture, James Majors attempted suicide by drinking Iodine, but his stomach was pumped and he was hospitalized for a short time. James Major pleaded not guilty  and John Palakiko asked the court to postpone his plea, but both were charged with first-degree murder and sentenced to hanging on June 18th, 1948 by a jury. In 1951, the Governor of Hawaii, Oren Long, issued a stay of execution two minutes before the hanging, he obtained some proof that the men gave forced confessions, once presented to a judge the execution could not take place. Though in 1954 another Governor, Samuel King commuted the sentences to 90 years in prison rather than death, but in 1962, Governor John Burns commuted the sentence to probation! Once out of prison John Palakiko, violated probation and was sent back to prison for three years. John Palakiko died in prison on September 11th, 1974, he was only 46 years old. James Majors completed his parole in December of 1968, his last known location was Oahu in 1978.Could Morgan’s Corner be haunted by the spirit of Therese Wilder? We found no evidence to support this, but did find a few more legends surrounding the area.

Others report that they see small balls of orange light that look like torches in the distance. Some believe these orange lights belong to the ghosts of the ancient warriors or ‘night marchers’, (huaka’i po). The legend has it that these night marchers wander through large areas of the island carrying torches. According to this legend, if you look a marcher in the eyes, you will walk with them forever. You could be spared if you have a relative that was taken by them. Local Hawaiians state that if you find yourself in the presence of a night marcher, you should lay on your stomach face down and make no eye contact, be quiet, breathe shallow and don’t move, this is said to make them leave.. Do you have any stories or photos of Morgan’s Corner? Post them in the comments!