Anatoly Moskvin was born on September 1st, 1966 in Nizhny, Novgorod, Russia. From an early age Anatoly was fascinated with cemeteries. Oftentimes through his childhood he would wander through various cemeteries with school friends.During his childhood, he was forced to kiss an 11 year old dead girl’s forehead, during a funeral procession. He claimed the young girl felt waxy and was wearing an embroidered cap on her head. This further pushed his interest in the dead and cemeteries. Anatoly went on to become a highly educated professor. Graduating from Moscow State University and specializing in Celctic History, most considered him nearly a genius.  He held a PhD and was a linguist, fully understanding and speaking 13 different languages. Anatoly lectured Celtic studies for a period of time at Nizhny Novgorod Linguistic University in Russia. He also spent some time working for the Institute of Foreign Languages. As well as an accomplished writer that would occasionally pen articles for local newspapers and other publications. 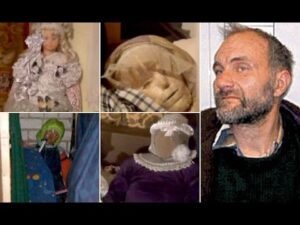 Anatoly was also considered an expert on local cemeteries. Often he would visit and research cemeteries with a total of 700 visited locations. At times he would sleep overnight in these graveyards, and once, he slept in a coffin that had been prepped for a burial the next day.In 2008, he wrote a series of articles on the history of the city of Nizhny’s cemeteries.Most viewed Anatoly as a bit eccentric, but no one believed his eccentricities were harmful. He had never married, dated, drank alcohol or smoked. His focus was primarily on his interest in cemeteries, burials, the occult and death. During the years Anatoly was visiting graveyards, vandalism and robbery increased in cemeteries. Particularly the City of Nizhny Novgorod, where Anatoly lived. Local authorities reached out to Anatoly for his expert opinion regarding these grave robberies. When they paid a visit to Anatoly’s home, that he shared with his parents, they realized he was not the expert they were seeking, but the actual grave robber. They viewed what appeared to be mummified corpses that Anatoly was speaking to as if they were living humans.

Police found 26 preserved bodies, with the youngest victim possibly only 3 years old and oldest possibly 25. Some of the bodies were stolen from nearby cemeteries, though some were taken from as far as Moscow. Anatoly had fully preserved the bodies, dressed them and posed them in various places throughout the apartment. In some of the bodies, he had inserted a music box into their chest cavity. Authorities also found piles of papers and books all over the small apartment creating a huge clutter. And among the piles authorities found instructions to mummify bodies and cemetery maps.On November 2nd, 2011, Anatoly Moskvin was arrested. Authorities found preserved dead bodies all over the small 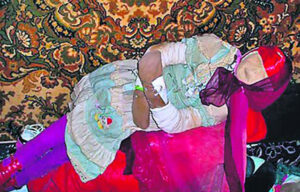 apartment and garage. Police photographed the bodies in seated positions on couches and shelves amidst clutter. Though only 26 bodies were found, Anatoly was suspected of desecrating over 150 graves. In his home authorities found instructions for making mummy’s or dolls, metal nameplates that were removed from headstones and photos and videos showing how graves are opened.

Fully cooperating with police, he explained that he was heavily immersed into the belief that science or black magic could bring back the dead children. He explained that he was an expert in Celtic culture and druids would sleep on graves to communicate with the dead. After researching various cultures and how they communicated with the dead, he began to seek recently deceased children. He would sleep on their grave to see if they would speak to him and give him permission to dig them up. He claimed in the twenty years he had been doing this he never dug up someone without prior permission from the spirit. Though as he aged, it became difficult for him to sleep on graves. This is when he decided to open the graves and take the bodies home so he could sleep near them and understand when they spoke to him. Research taught him to dry the bodies with salt and baking soda then place them in and around cemeteries to dry. Once they were dry, he attempted to give children corpses a functional body, so when brought back to life they would be happy. He began stuffing the body cavity with old rags, providing padding and would add masks to their faces and dress them in bright colored clothing. After this process, they appeared to look like homemade dolls. This is why his parents claimed to never have known.

Anatoly told authorities he knew he was doing wrong, but could hear the children’s spirits calling to him to bring them back to life. He also admitted to authorities that he wanted a child of his own, but never had the opportunity. He had at one time attempted to adopt a female child but his application was denied. He completely denied any sexual attraction or inappropriate behaviour with the dolls. He stated that they were his children. He held birthday parties for them, celebrated holidays with them and even sang to them.

During the court proceedings, Anatoly was given a psychiatric evaluation. Diagnosed with a form of paranoid schizophrenia, he was unfit to stand trial. On May 25th 2012, the court deemed him unfit to stand trial. He was sentenced to a psychiatric clinic. There have been many attempts to release Anatoly Moskvin, but evaluations prove that he is simply not ready. Was Anatoly Moskvin psychically connected to the dead? Or just a grave robber.