Multiple murders in the western part of the United States in one summer time period. One grips the headlines of all media outlets, the other has very little exposure. Both cases are equally devastating to all surrounding it.

In 2016, Kylen Shulte left an abusive relationship in Montana for a new life with her father, in Utah. She felt the move saved her life. Kylen began acclimating to life in Moab, Utah and by 2018, she was working for Moonflower Community Cooperative in Moab as a cashier and hat model.

While hiking with her father, she met Crystal. By 2019, Kylen began dating Crystal Turner. Crystal was originally from Arkansas but just like Kylen, settled in and called Utah home.

The couple fell deeply in love and eventually married in April 2021. The couple married in a treehouse in Arkansas, their deep love of the outdoors flowed into their wedding and during the short life they shared together, they camped frequently throughout the La Sal Mountains of Utah where they lived.

The two went back to work after arriving back home from their wedding. Kylen back at Moonflower cooperative and Crystal at McDonalds, though by August, Crystal would begin working at Trailhead public house, which was a tavern right across the street from where Kylen worked.

On August 13th 2021, between 6 pm and 8:30 pm, the couple visited Woody’s Tavern where they spent the evening with friends. The pair were semi-regular customers to the tavern. During this evening, the newlywed couple shared with their friends that they had noticed a creepy man hanging around near their campsite and camping next to them. Security footage shows the couple leaving Woody’s Tavern at approximately 8:30 pm that evening.

The next day, August 14th, 2021, the two were spotted driving in Moab in a silver Kia. This was the last sighting of Kaylen and Crystal. When several days went by and neither of the women had gone to work, their family and friends became worried. 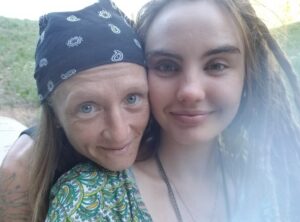 When the women were initially reported missing, authorities did not investigate as they suggested the two left town willingly. Though family and friends knew something was wrong. The couple had three vehicles, a Harley Davidson motorcycle, a Kia Sorento and a 1987 Ford Econoline van. The couples Harley was still in town, parked. Family and friends knew the pair would not leave town without it.

After Kylen’s father posted a heartfelt plea on facebook, asking anyone to recall if they’ve seen the two women and to keep looking out, a good friend of Kylen’s dad, Cindy Sue Hunter responded. She said,

Cindy Sue Hunter packed a cooler full of water, snacks, towels and a blanket. She also brought along a shovel in the event their car needed to be dug out. She then went out in search of the two women on August 18th.

She located their van parked across the street from McDonalds where Crystal worked and spoke with co-workers and then peeked in the van. No one was in the van..

Cindy would next search for the camp site that the two women were last known to be. She searched the Pack Creek area and then began to drive into the La Sal Mountains, heading towards the Geyser Pass trailhead. Along the way she stopped at every ravine to look for their car and showing random hikers photos of the missing women.

Driving down a very winding Geyser Pass road, she passed more campsites and showed photos of the missing women. Eventually driving past a cattle guard, something caught her eye to the left of her. She turned into this campsite and came upon the couples vehicle, a Kia. Looking around the site, she came across the women’s pet rabbit that they often took camping with them. She could hear a creek running nearby and began walking, where she came upon a pile of plastic Gatorade bottles. And then Kylen’s body in the creek. Both women were found dead from multiple gunshot wounds to their backs, sides and chest area. Both women were undressed from the waist down and one woman’s bra was pushed up to expose her breasts.

After the discovery of the body, authorities retrieved the Kia owned by the couple. It was located at the campsite. Later authorities obtained a search warrant for the 1987 Ford Econoline van that had been parked near McDonalds in Moab.

During their search of the van, authorities discovered drug paraphernalia, including an electronic scale, glass pipe, small plastic containers and various pills, such as Clonazapam, amoxicillin, ibuprofen and prednisone.

By mid September, Gabby Petito and her boyfriend Brian Laundrie made national news.
The couple had gone on a van life trip across the country. Though Brian ended up back home in the van without Gabby. Due to a possible crime being committed across state lines, the FBI joined in this search to find Gabby and later a missing Brian.

The only hard connection between these two cases at this time are the fact that two days before Kylen and Crystals murder, Brian and Gabby’s van was pulled over after a 911 call came in stating a man was slapping a girl and then they both hopped in the van. This altercation took place in front of the Moonflower where Kaylen worked.

During this same summer, June to be exact, John Freeman Colt, a very violent sex offender escaped from a mental institution in Kansas.

Doctors feared his escape would lead to a violent rape spree. While he was hiding by camping in national parks and forests, authorities have not been able to link him to this double murder. He was recaptured in September of 2021.

Thus far, there are no other suspects or clues as to what took the life of these free spirited women. Sean-Paul Schulte has sat in a local park in the area and asked locals or anyone to bring him clues or tips to help solve the murder of his girls. Not long ago, locals brought him some keys they found near the campsite. They had some sort of membership tag on them, though he has not heard anything back from authorities regarding the keys.

There is now a $20,000 reward offered for information that leads to the arrest and conviction of people responsible for the murder of Kylen and Crystal. As we always leave these mysteries to the realms of the unexplained… We are begging you not to this time. If you know something, or know somebody that does, please contact the authorities and help these women rest in peace.

The Grand County Sheriff’s department, FBI and the Utah State Bureau of Investigations is working on this case. They encourage anyone with tips to NOT share them on social media but to call the Sheriff’s office directly at area code 435 259 – 8115

1 thought on “What happened to Kylen and Crystal”