As Christmas of 2022 approaches, we are making plans with loved ones and gathering together with our families… But four families are grieving and begging for answers at this very moment. We will do our best to explore the timeline of this crime and hopefully shed light on potential clues. Most details are kept confidential to maintain the integrity of the active investigation and authorities have not yet stated whether they have a suspect or whether they have found a weapon that may have been used in the attack of the four university students, 21 yr old Madison “Maddy” Mogen, 21 yr old Kaylee Goncalves, 20 year old Xana Kernodle and 20 yr old Ethan Chapin.

This awful story begins on November 12th, two of the four victims, Kaylee Goncalves and Madison Mogen went out for the evening. They went to the Corner Club bar in downtown Moscow, Idaho. They arrived around 10 pm and stayed until about 1:30 am. 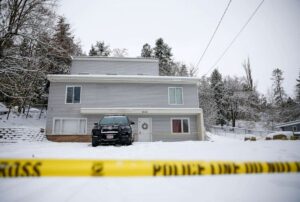 This is according to the Moscow police.

The two were next seen around 1:30 am at a local food vendor truck. They were caught on camera at this location and then caught a ride with someone that is not associated with the case. The two young women arrived back at their shared off campus rental home around 1:45 am.

Two of their other roommates arrived back around the same time. Xana and Ethan had been at the Sigma Chi fraternity that evening. Xana and Ethan were a couple who had been dating for some time. Ethan did not live in the home, but was staying the night with Xana that night.

Kaylee and Madison or “Maddy”, were in the same room that night as well as the same bed. The two had been friends since the 6th grade. One of Kaylee’s family members confirmed, phone calls were made from Kaylee and Maddy’s phone between 2 and 3 am. The calls were to Kaylee’s ex boyfriend… Recently the two had broken up, roughly two weeks prior to the murders.

That evening at the bar, Kaylee and Maddy chatted with, ‘Adam’, the bartender who was also Kaylee’s ex-boyfriend’s roommate.

Neither have anything to do with the murders.

Authorities say the 4 victims were murdered between the hours of 3 am to 4 am on November 13th.

A 911 call was made from inside the home 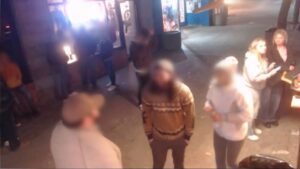 that morning, by the remaining two roommates.

The  two surviving roommates in the home, Dylan Mortensen and Bethany Funke. called other friends to the home because they believed that someone on the second floor had passed out and was not waking up. The 911 dispatcher spoke with many different people before officers arrived.

Authorities revealed that the two surviving roommates had been out the night before. They had been around town that night, but separately and both were home by 1 a.m. and asleep at the time of the murders.

Both survivors stated that they did not wake until later that morning. There is a sixth roommate listed on the lease to this six bedroom rented home, but authorities state this person was not present in the home the night of the stabbings and is not believed to have any involvement in the crime as it is stated that this person left the home at the beginning of the school year.

I’m sure you are all wondering  what floors the victims’ rooms were and where were the survivors’ rooms located.

Dylan and Bethany, the surviving roommates, each had bedrooms on the first floor. This is a split level house. With a first, second and third floor. 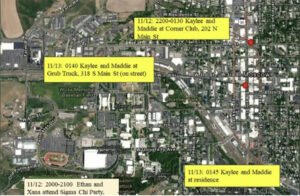 The victims were found on the second and third floors. Two victims on each floor. Kaylee and Maddy on the third floor and Ethan and Xana on the second. And a dog was placed in an extra bedroom, alone on the first floor.

This is unusual because the dog belonged to Kaylee and her ex-boyfriend and it generally slept with Kaylee and Maddy. It was also confirmed that the dog would have scratched or cried had it been locked in the room alone.

Strange that the surviving roommates didn’t hear anything including the dog. Though, we are not speculating or making any accusations…

Authorities did release that all victims were stabbed multiple times and died quickly. It appears that several were asleep and only some have defensive wounds.

My thoughts on the defensive wounds are that possibly Ethan and Xana heard the dog or heard something… They were on the second floor. So they possibly attempted to deflect the attack.

Though it has been said that Kaylee had a stalker and was very fearful of him. Though there isn’t much more information on that situation.

Her father did confirm that she spoke to him about a stalker.

Weapons… There is a lot of speculation regarding the knife that was used. I’ve heard that it is a military grade knife… Though the only information we have on the knife is that it is a fix-bladed knife and it has not been found.

While there is very little information in this case, the one key to unlocking more information is the mysterious white Hyundai. Authorities know it was at the home the night of the murders, but have not been able to make contact with the occupant or occupants of the vehicle.

This particular car was caught on several cameras along its route to the house that night. It even cut through the parking lot of a gas station heading in the direction of the house around 3:45 am that night. Definitely the sign of a man on a mission.

It is a 2011- 2013 white Hyundai Elantra and our border patrol near Canada are now watching for this vehicle in case the driver decides to flee the country. This car and its occupants are key to cracking this case… The gas station camera catches it speeding through the parking lot at 3:45 am, 1.2 miles away from the murder scene and… this is a town with less than 50,000 people…

The next key issue is the door keypads… There was no forced entry to this home. Which means the killer would need to be close to one of the occupants of this home must have had that door keypad code.

who was questioning some young men drinking in a park… Not far from the home where the murders took place.

Some are saying that you can hear a scream or screams in the background. I’m not sure what I’m hearing though…

The other interesting video is the one of Kaylee and Maddy walking home from the bar that night… There is audio of them talking about “Adam” who was their bartender and is not involved.

And neither is the hoodie guy that the two women are walking to the food truck with… He’s been deemed by the internet as ‘The Hoodie Guy’.

Either way… here’s what I believe happened that night… I believe someone may have already been in the house… Waiting in or near Kaylee and Maddy’s room. Possibly waiting for them to go to sleep. Then once they did, the intruder stabbed them. On the second floor, Ethan and Xana hear something and possibly are attacked by the intruder as they come down the second floor.

While this is a very good theory…. It doesn’t explain how the dog got to the 1st floor and trapped in a room alone?

Which looks like a sign that the assailant was someone they knew, that the dog was familiar with in order to be removed from the scene of the crime.

If you or anyone you know has any information regarding this crime, please contact, contact 208-883-7180 or tipline@ci.moscow.id.us.