I think it’s safe to say it’s literally freezing across the U.S.! January has always been known for it’s cold temps, so the best thing to do is curl up and read some great stories here at unexplained realms!! lolThe cold weather has inspired us to research the real life ‘Ice Man’ aka Richard Kuklinski a serial killer known for freezing his victims. Kuklinski was an American contract killer who lived in the suburb of Dumont, New Jersey with his wife and children. Richard Leonard Kuklinski was born April 11th 1935 and it’s reported that he committed his first murder at 14 years old. It’s no surprise that Richard had a violent side to him as his parents were abusive, his father being an alcoholic abuser injured and killed his eldest sibling. His mother from time to time would beat him with a broom handle. 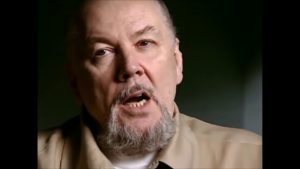 Richard started out killing cats, but then moved onto commit his first murder while involved with a neighborhood street gang. Bludgeoning a young man to death after being teased and bullied by him. After the first murder he removed all identifying marks from the body before dumping it. With a feeling of power, he continued on to kill anyone that angered or irritated him, at one point even stabbing his wife as a form of punishment. The IceMan’s wife Barbara had very little knowledge of the murders he committed. In interviews with Barbara, she indicatedthat Richard had long periods calm, he was a family man, taking family trips to Disney World, organizing family BBQs, and even attending mass. Though there were outbursts at times and Richard became physically abusive towards Barbara and emotionally abusive towards the children.Richard became respected within the Mafia by the young age of 18, he killed a unknown man that was selected for him by the mafia, to kill on a random sidewalk. This landed him as a hitman for the Genovese crime family. During his hits he often removed teeth, fingers or toes and dumped bodies off bridges, down mineshafts or into rivers. It is said that worked for many of the crime families, such as Newark’s DeCavalcante and New York’s Five Mafia families, which includes the Gambino Crime Family.Richard Kuklinski killed in many ways, guns, ice picks, hand grenades, chainsaws, torture, etc. but he claimed his favorite way was a nasal-spray bottle filled with cyanide. He earned his title by freezing his victims to cover their time of death. When the ‘Ice Man’ was caught in December 1986, he was 51 years old and was sentenced to life in prison in 1988. While in prison he granted many interviews, and often bragged about killing over 200 people. In March 2006, the Ice Man died in Trenton, New Jersey, under suspicious circumstances. He believed he was being poisoned while incarcerated and was to testify in crime family trial at the time he passed.