As I sit in the studio on this rainy and blustery day, the sounds of the rain make me wonder about our weather patterns. Where do storms come from? Are tsunamis, hurricanes, and rain storms just natural events? Or natural events that have been manipulated. Can we manipulate weather?

How could the weather be manipulated though? Some will argue that the High-Frequency Active Auroral Research Program or HAARP is responsible for major earthquakes and other catastrophic weather disasters.

What is HAARP you ask? The acronym stands for High Frequency Active Auroral Research Program. It is a high-powered radio transmission research facility jointly operated by the US Navy, Air Force as well as multiple universities. 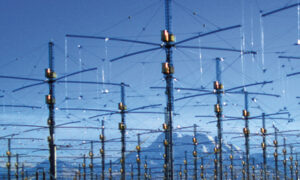 The goal of this program and facility is to study the behavior of the ionosphere. The ionosphere is between 50 and 400 miles above the Earth’s surface or as some describe, it is at the edge of space. The ionosphere is the Earth’s upper atmosphere and is ionized by solar radiation. It has a very important role within atmospheric electricity as well as forming the inner edge of the magnetosphere and influencing radio propagation to very distant places on Earth.

It is of importance to the facility to monitor and understand the physics of the ionosphere as it responds frequently to the influences from the sun. Solar flares are able to send solar particles towards the earth.

So basically, HAARP was created to study the ionosphere to enhance technology for radio communications and to learn how our ionosphere reacts towards the sun’s influence. The facility began being built in 1993 and by 2007 it’s ionospheric research instrument was completed. By 2008, the facility had incurred upwards of $250 million tax funded construction and operating costs, which led to an announcement in 2014, the HAARP program would be shut down, permanently. Though… By 2015, the research center was handed over to the University of Alaska, Fairbanks, by the Air Force.  The facility and all it’s equipment remains located in the icy wilderness of Gakona, Alaska.

The HAARP facility continues to research and explore the ionosphere.

This all sounds so innocent, right? But not according to conspiracy theorists, many believe the facility was designed to control the weather. Based on it’s remote location in a low populated area, it’s often a target of conspiracy theorists. It doesn’t help that the facility features 360 radio transmitters, 180 antennas that are a foot thick and are 72 feet high, and 5 very powerful generators. When turned on they create geometric patterns in every direction.

One of the main conspiracy theories is that the energy waves that come from the facility’s antennas are actually being directed back onto the earth and causing Extremely low frequency waves, or often referred to as ELF waves. Theorists believe that these waves cause rapid heating of the earth’s atmosphere and can change the earth’s magnetic fields, as well as have effects on humans. Some theorists will argue that these changes created by the ELF waves can alter humans moods, and brainwash large populations of people.

Conspiracy theorists even state that these waves change wind patterns and can be strong enough to affect the movement of the tectonic plates, which spirals their theories into blame… Blaming the ELF waves for floods, earthquakes, airplane crashes, and so many more catastrophic disasters.

In 2006, the Philippines suffered extreme damage and loss from a major landslide. Killing an estimated 1,800 and damaging property and structures all across the region. Scientists claimed it was a “classic landslide scenario”, but theorists believed it to be the work of HAARP, manipulating the weather and causing excessive rain that eventually led to the landslide.

Theories have gone on to blame HAARP for a 2011 earthquake and tsunami in Japan, a 2013 tornado in Moore, Oklahoma and missing flight 370 to Malaysia.

In a history channel documentary the following was stated :

“Directed energy is such a powerful technology it could be used to heat the ionosphere to turn weather into a weapon of war. Imagine using a flood to destroy a city or tornadoes to decimate an approaching army in the desert. If an electromagnetic pulse went off over a city, basically all the electronic things in your home would wink and go out, and they would be permanently destroyed. The military has spent a huge amount of time on weather modification as a concept for battle environments.”

You can find that full documentary on the History Channel or clips of it on YouTube.

In 2010, the 64th president of Venezuela, Hugo Chavez blamed HAARP for triggering the earthquake in Haiti, he stated that the United States Navy had launched a weapon capable of inducing the powerful earthquake that occurred in Haiti. He believed it was a drill at that time, but that the U.S. would eventually target and destroy Iran to take over. He also went on to state that the U.S. used their weather weapons to play God.

In 2011, Nusrat Mirza, a renowned columnist also accused the U.S of modifying weather to cause the March 11th, 2011 earthquake and tsunami in Japan.

Even Professor Michel Chossudovsky from the University of Ottawa’s Emeritus, wrote an article in which he states weather modification is far from a conspiracy theory. His belief was that the US and Russia have developed the ability to manipulate the climate for their military use.

Other than accusations, there has been no proof that weather modification is something we can actually do.

What do you believe? I suppose anything is possible, but for now, I guess we will leave this to the realms of the unexplained…