If you’re like me, you love looking at the sky and watching the clouds move by, but what happens when your peaceful sky gazing is interrupted by large streaks in the sky?!Some call them Chemtrails and some call them contrails. Contrails are condensation caused by a jet engine. When an engine of a jet emits its hot and humid air into a cold atmosphere, it will leave behind contrails. Scientists state it is simply water vapor leaving the engine that immediately is condensed into water droplets and crystallizes into ice crystals which appear as clouds for us! 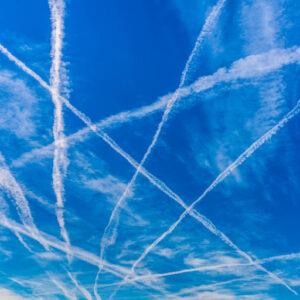 Though some believe these trails of condensation are slightly more sinister as they contain more than just water vapor and ice. Some say they contain engine exhaust, soot, carbon dioxide, and even nitrogen oxides. These added chemicals are very harmful to the environment and have led to the nickname chemtrails. Though conspiracy theorists believe the trails are even more sinister than just allowing harmful chemicals into our air. Most believe that the trails have become thicker, longer and remain in the sky for a lot longer than they used to. This leads theorist to believe chemtrails could be biological warfare on the U.S. citizens, used as a method of population control, weather modification or lending to the rapid increase of global warming.A large proponent of the chemtrail belief is, Clifford Carnicom. Clifford advocates and brings attention to the chemtrail phenomenon. With a background as a research scientist and 15 year federal employee, (Dept. of Defense, Bureau of Land Management, & Forest Service). Clifford has been a self-employed computer consultant and has an extensive background in geodetic science, advanced mathematics, computer science and physical science. Clifford believes the chemicals being sprayed into the atmosphere maybe used to harness the energy in storms and diminish the amount of rain and moisture in our world. Clifford also believes respiratory ailments have increased and are most likely related to the harmful chemicals being spread by chemtrails. http://carnicominstitute.org/Scientists insist there is nothing more than water vapor coming out of the planes engines and that there is nothing harmful being spread through our country. The condensation does spread into the cirrus clouds, can block sunlight and reduce our temperatures and has been a concern for for environmentalist, but other than that, science states chemtrails/contrails are not harmful to us….What do you think? Are there dangerous chemicals causing humans harm?

1 thought on “Are Chemtrails harmful?”