Shinto is a religion that originates in Japan. Many of its practitioners classify it as a nature religion and it revolves around the Kami, these are the Shinto gods that are believed to inhabit all things. Most worship the Kami with shrines in their home as well as outdoor public shrines. One might see offerings left at these shrines, including food or drink.

Shinto is said to have no real founder or formal scripts such as a Bible or Sutras.

But what happens when a Shinto ritual turns dark and goes wrong… This is exactly what happened in the Himuro Mansion.

The most common Shinto ritual is all about purification. One would purify themselves or an object before worshipping the Shinto gods, Kami. The ritual is said to be performed with a priest’s wand with water.

It is believed a Shinto ritual had gone terribly wrong in the Himuro Mansion. The mansion sits on the southern region of Himuro Mountain, though the exact location is unknown and some speculate it lies in a region right outside the Tokyo city limits. 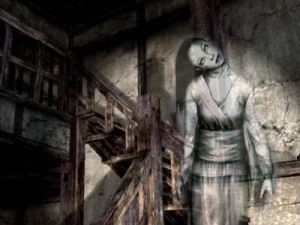 The mansion is surrounded by five shrines with five different Shinto gods. Inside the mansion, the urban legend states that the gruesome murder of seven people took place. The Himuro family were practicing a Shinto ritual called the ‘Strangling Ritual’.

The Strangling Ritual was performed to seal off a portal for bad karma to come into the Earth. Many stories discuss the family performing the ritual yearly and some state it was every half century.

To perform the ritual a young maiden was needed. They would select her at birth and raise her away from the rest of the world, completely isolated, to prevent her from creating any bonds or ties with any other person. Only on occasion would they allow her to walk through the mansion.

When it came time for the ritual to be performed, the maiden would be bound by ropes. Her neck, ankles, and wrists each had ropes tied to them, the ropes were attached to five oxen. Once cued. The oxen would run, pulling the maiden apart by her limbs.

The ropes that were tied to her were soaked in her blood and placed over a portal that would release bad karma into the Earth. It was believed that these ropes would seal the portal.

The ritual was done time and time again, though the very last one… didn’t go as planned. This maiden had fallen in love with a young man she could see from the mansion window. Due to the attachment to another she could no longer participate in the ritual. It was believed that because the young maiden had fallen in love, she created a physical and psychic tie to the Earth and tainted her blood and spirit. The ritual could no longer be performed.

This dishonored the Himuro family, they had failed the Earth. The patriarch of the family was distraught over the dishonor brought to their family name, he felt it better to kill his entire family and himself. Believing this death would be better than suffering whatever karma or evil would now inhabit the Earth.

It is said the mansion remains extremely haunted. Some report that they see blood on the walls or female ghosts wearing white wander throughout the property and some with marks on their wrists. A report of a folklorist, Ryozo Munakata moved to the area with his family in order to study and understand the mansion. Though he and his family disappeared, there are other stories of individuals who went missing after visiting the mansion. Some even state that bodies have been found under the mansion in tunnels.

Though.. The most peculiar part of this story… is that no one seems to have actually visited the mansion nor do they know it’s exact location. In 2009, Dr. Matt Adler, a leader of a paranormal team, had announced that he found the location of the Himuro Mansion, though it is said he went missing as well.

This terrifying tale may be completely fabricated though… as the company Temco released a survival horror game in 2002, called Fatal Frame, for PlayStation 2.  The storyline of the game is controlled by a character named Miku Hinasaki, she searches the haunted mansion in search of her missing brother, Mafuyu.  The game’s opening screen states that it’s based on a true story.

Is this a haunted mansion in Japan, inhabited by the souls of the lost or was this a tale coming from a video game… We may never really know, we will just have to leave this to the Realms of the Unexplained…