Do you remember being taunted by friends when you were younger, to say ‘Bloody Mary’ in the mirror in hopes that a very bloody woman named Mary would jump out? Or maybe you remember playing the midnight game where you knock on a door while holding a candle and the Midnight Man comes through. Obviously most of these types of games come from urban legends and beyond that, some folklore.

The Elevator Game is very similar to these games. It is said to have originated in South Korea. An elevator is needed for this game rather than the use of mirrors and candles. Once in the elevator, it is said that one would need to push a specific sequence on the elevator buttons to be taken to another realm. 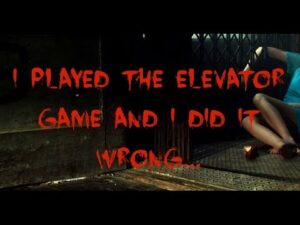 It is said that once you reach the Fifth Floor you will encounter a young woman, who will enter the elevator. You are not to look at her or talk to her. They say if you look or talk to her she may keep for her own, forever. Once she is fully in the elevator, you must press the button for the First Floor. If the elevator goes to the First Floor, you would get off without ever looking at the woman. Just simply get out and walk away.

As you step out into another dimension, she may screech at you. If you choose not to get off the elevator, simply press the button for the First Floor and look at no one that enters on the way down, nor should you speak with them.

If you choose to get off, the other dimension is described as a darker version of our real world and you are completely alone there. Some say your electronics may not work in this realm. Others say you could pass out in this realm and wake up in your own home, but is your real home or the dark version of your home?

In order to get back to your real true world, you must first enter the exact same elevator you arrived in. You will then need to repeat your process. Visit the Fourth, Second, Sixth, Second, Tenth, and Fifth Floors. Arriving on the fifth floor, you will press the first floor button. As it begins its journey to the First Floor, you must stop it from returning to the Tenth Floor, pushing lower numbered buttons if it attempts to go back up.

It’s hard to say if this elevator journey is truly an urban legend or could it really take you to another dimension.

In 2013, the Elevator Game became a discussion in the case of Elisa Lam. Elisa was found naked and dead, floating inside a large water tank on the roof of the Cecil Hotel in Los Angeles. The Cecil Hotel is notorious for death and oftentimes is referred to as a haunted hotel.

The last footage of Elisa shows her on an elevator in the Cecil Hotel and she’s pushing buttons and acting erratically. She steps out then back in and presses multiple buttons.

It was reported that Elisa suffered from mental illness. Could she have played the elevator game and believed it be real following it up to the water tanks, or did she really reach another dimension and was unable to find her way back?

If you visit Reddit, you’ll find discussions and stories of actual individuals playing this game. The game even inspired the 2015 film, The Elevator Game, it’s a story of four friends who miss a pro basketball game due to a blizzard. They tried to pass the time while stuck in the apartment, so they played the elevator game. They end up entering an Outer World and it ends up being pretty terrifying.

What do you think? Is this just an Urban Legend or could the sequence of the numbers 4, 2, 6, 2,10, 5, and 1 really lead you to another dimension? Guess it’s just left to the realms of the unexplained.

3 thoughts on “The Elevator Game”