Fort George Island, Florida, March, 1974, the Betz family were trying to determine what caused a brush fire that occurred on their 88 acre wooded property. The area is heavily surrounded by the marshlands, large hanging trees and various tropical plants. On this particular day, Antoine Betz, an engineer and his wife Gerri Betz and  21 year old son Terry Betz, who was a pre-med student at the time were searching for the reason the brush fire occurred. While inspecting the brush fire, Terry found a shiny sphere in the brush. Not knowing exactly what it was, they assumed it could be a piece of a NASA satellite. There wasn’t any evidence to support their theory or of an impact and this shiny ball hadn’t been damaged either.The family loaded the shiny orb and took it home. They found that the sphere weighed 22 pounds and could pass for a shiny bowling ball. The family showed it to friends and other family members and began to assume it was an old cannonball as the island’s history dates back to the 16th century.Though strange occurrences began shortly after the Betz family brought the sphere home. Terry began strumming his guitar while the ball sat in a window sill and the ball began to vibrate in the same way that a tuning fork would. It would also made a throbbing sound to certain tones.Other times, the family would hear the sound of an organ throughout the home, but the family did not own an organ.

The Betz family began to experiment with the seamless shiny ball by placing it on a table and watching it navigate itself without falling off the table. Other times the ball would vibrate, pause and roll back to who first rolled it.  The family stated that the ball rolled for 12 minutes straight without ever stopping.Terry experimented by tapping on the ball with a hammer which caused the ball to make a sound similar to a ringing bell. When placed on the family’s glass top coffee table, it would roll directly to the right edge then roll back to the opposite edge and would continue to do this over and over.Everyone reacted differently to the ball, the family’s dog was visibly bothered by a sound that came from it. The dog would whimper and cover her ears as if she could hear something no one else could. A 12 year old relative was extremely captivated by the sphere. Aside from it’s odd sounds, vibrations and movements, the family believed the ball behaved differently during different weather conditions, noting more activity on sunny, clear days, but it showed no reaction to heat or infrared light.This shiny sphere could move around on it’s own and quite possibly made doors slam throughout the house and the family noticed a magnetic area on the surface of the ball. The surface was described as shiny, polished, with no seams, hinges, or screws, but there was a triangle on the smooth surface. It seemed as if the ball had internal instincts and acted to protect itself.After some time, the Betz family decided they needed to identify this strange, seamless ball, so they contacted the media. The Jacksonville Journal, sent photographer, Lou Egner.While the photographer was present, he witnessed the sphere roll across the floor, stop and turn and roll another direction.April 16, 1974, Gerri was quoted in News Sentinel, from Lodi, California,  “If you shake the ball vigorously and then place it on the ground, it feels like a huge Mexican jumping bean, which is trying to get away from you.” 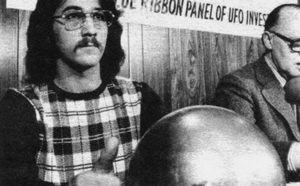 Since the family went to the media, the ball quickly became headline news and gaining the attention of the military and scientists. NASA as well as the US Marine Corps made contact with the Betz family to see this ball for themselves. Many UFO investigators also made contact with the family.With so many contacting the family and asking for the ball, the were very cautious of who they released it to. The family finally allowed the ball to be released to the Jacksonville Naval Air Station. They were to have a report within 2 weeks and if the government didn’t deem it as government property, it could be released back to the family.Oddly enough, an x-ray wasn’t possible as they were unable to penetrate it. It was determined that the shell of this ball was about ½ inch thick. The material was stainless steel and magnetic ferrous alloy, which was created for heat treatment and to avoid corrosion. The sphere was able to withstand pressure of 120, 000 pounds per square inch. Further inspection by the Navy proved the ball had two more objects inside with no signs of radioactivity. Since the Navy was unable to find anything dangerous or harmful, they released the ball back to the Betz family.The family allowed several other researchers to study it in their home and even entered it into a contest to prove UFO’s are real, they didn’t win. The last researcher to make a statement on the ball was Dr. James Harder, he claimed that if the ball was compromised in any way, that it would behave like an atom bomb.After this claim, the family and the sphere faded out of the media spotlight. The origins, purpose and whereabouts of the Betz Sphere are unknown today.