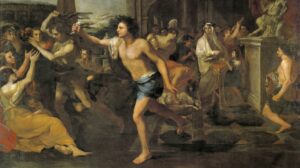 Valentine’s Day is celebrated all over the world. It’s actual origins are hard to find… Some say it began with Saint Valentine of Rome. Though, others believe it was celebrated much earlier than this with a festival called Lupercalia.

Valentine’s Day wasn’t always about hearts, roses and chocolate, as a matter of fact, some believe it’s origins lie with an ancient pre Roman festival called Lupercalia. The festival took place in February, from the 13th to the 15th.

A group of Roman priests, called Luperci or the brothers of the wolf, participated in the festival that dates back to the 5th century. The Luperci were men between the ages of 20 to 40 years old. They were separated into two groups based on ancestry.

The festival was violent, bloody, and extremely sexually charged. After the animal sacrifices, there is even a lottery that assists in matchmaking couples.

This festival occurred so long ago, there is only a Roman legend to explain its existence. The legend states that the ancient King Amulius forced his twin nephews, Romulus and Remus out of the kingdom. They were to be thrown into the Tiber River to pay for their mother’s broken vow… She had broken the vow of celibacy.

A servant felt badly and placed the two boys in a basket. It is believed the river-god safely brought the brothers to a wild fig tree where they were rescued by a she-wolf. The she-wolf cared for the boys and suckled them in a den at the base of Palatine Hill. This later would be where Rome was founded.

The twin boys were later adopted by a shepherd and wife. In time they killed the uncle who sentenced them to death and went back to find the cave in which they lived with the she-wolf. They named the cave Lupercal.

Based on this legend, it is believed that Lupercalia began to please the she-wolf as well as the god of fertility, Lupercus.

After this, the festival took place every year, always beginning with an animal sacrifice. A male goat was used and a dog, to represent sexuality. The group of Roman priests, called the Luperci performed the sacrifices and ended the sacrifice by smearing the animal’s blood on the foreheads of two naked young men using the same knife used during the sacrifice. The two Luperci would symbolize, Romulus and Remus

To remove the blood, a piece of wool which had been soaked in goats milk was used.

After this ritual sacrifice, there is a feast and after the feast the Luperci then cut the hides of the sacrificed goats into whips.

The young Lupercal priests would then leave the cave and run nearly naked or sometimes completely naked and whip women in the streets. Though, the women welcomed the whipping as it was good luck to be whipped by one of the Lupercal priests, as well as assisting in fertility and childbirth.

And in some cases, women would run to the nearly naked priests and allow themselves to be whipped.

During the festivities, these Lupercal priests also chose a woman’s name from a jar and would be coupled with them for the rest of the festival. It is said that most stayed a couple until the next year’s festival and some fell in love and were married.

This festival lost its appeal over time and obviously we don’t hold these types of festivals in current times. Though it was said at one time Mark Antony participated in the festival while Julius Caesar watched.

We know that Lupercalia lasted well into the 4th century as Pope Gelasius had written a letter regarding Christians and their participation in Lupercalia. He discussed how the participants in the original festival would run naked, but in his current time, participants were not naked and should be willing to be.

By the time that Pope Gelasius wrote about the festival, it had evolved into a more modest practice. Leading the pope to make a statement.

“Your own bashfulness ought itself to teach you that the Lupercalia is a public crime, not salvation and the cult of the divinity, regarding which no wise man would blush. Rather the Lupercalia is an instrument of depravity, which your mind, bearing testimony against itself, blushes to fulfill.

By the 5th century Pope Gelasius ended Lupercalia all together. Some say this is the period of time, Valentines Day was created. And others state that Lupercalia was the original Valentines Day…

I guess we’ll never really know if this dark festival gave Valentine’s Day it’s beginning… Maybe we will just leave this to the realms of the unexplained.