Have you ever experienced Deja Vu? You know the sensation of seeing something once before or having been somewhere but you have no real memory of the location? Some will argue that Deja Vu is simply memories from a past life and that we are all reincarnated. Could Dorothy Eady have remembered her past life as an Egyptian Priestess? Join us for the story of Omm Sety.

In 1904, Reuben Ernest Eady and Caroline Mary Eady gave birth to Dorothy Louise Eady. The family would have been considered a lower middle class family, living in a coastal town. Dorothy had an uneventful first few years, but at age three she fell down a flight of stairs. After the fall, she was pronounced dead.

One hour later, Dorothy sat up in her bed and had fully regained consciousness. Happy to have their daughter back, the family moved forward. Though this was no longer the same little girl they loved.

In 1908, the family visited a British museum, particularly an Egyptian exhibit. Most would expect a small child to become restless while viewing artifacts, but not Dorothy, she would approach the statues and kiss their feet. Witnessing this strange behaviour, Dorothy’s mom attempted to pick her up and move her and Dorothy screamed that the statues were her people and she wanted to stay with them.

In the days that followed the visit to the museum, Dorothy would dream of buildings with columns and beautiful gardens full of flowers, she began speaking in an accent and weeping while asking to be brought home, though she was home.

When Dorothy viewed photos of ancient Egypt, she would translate the hieroglyphics to her mother. When seeing a photo of the Temple of Seti I at Abydos, she would yell to her father, that it was her home and she used to live there.

At one point she was even asked to leave her Sunday school as she began to compare an ancient Egyptian religion with Chrisitianity and ultimately was expelled from school for girls, because she refused to sing a hymn that’s lyrics called for God to curse the swart Egyptians.

By this time,the family was no longer allowed to attend any Catholic Masses. Though Dorothy said the Catholic Mass reminded her of the Old Religion.

As a teen, Dorothy believed her dreams were connected to Egypt and she began attending groups that discussed reincarnation and began to study everything she could about Egypt.

By 1933, Dorothy married Abdel Maguid, who was Egyptian. After marrying, the two moved to Cairo in Egypt and had a child. The child would be named Seti, at Dorothy’s insistence. Seti was named after the 19th Dynasty Pharaoh.

Dorothy wanted to follow the Egyptian custom of not saying the mother’s first name. Therefore she became Omm Sety, which translates to mean, the Mother of Seti. 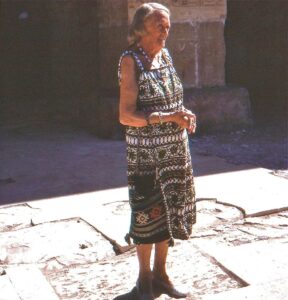 The marriage between Dorothy and Abdel was a troubled one. Dorothy continued her studies of Egypt and Abdel had no need nor interest for studying Egypt. Abdel would frequently find Dorothy in what seemingly appeared to be a trance. During the trance she would ‘automatic write’.

If you don’t know what automatic writing is, it’s the ability to write full words without even realizing you are writing it.

Abdel often found Dorothy writing hieroglyphics. Dorothy referred to her  70 pages of hieroglyphics as her Spirit Guide. The guide would describe Dorothy’s former life. Abdel claimed at one time he witnessed a pharaoh sitting at the edge of Dorothy’s bed. The unstable marriage did not last. Abel accepted a teaching job in Iraq and Dorothy was left to spend her days studying Egypt.

Dorothy continued to have out of body experiences, see apparitions and understand the guide she had written while in a trance.

The 70 pages of hieroglyphics translated into her truth. In her former life she was born in ancient Egypt. Her name in that lifetime was Bentreshyt, she was a priestess who resided in the Temple Kom El Sultan. She claimed that by the time she was 14 years old, the Pharaoh Seti fell deeply in love with her. During this time she had made a vow of virginity as a priestess without fully understanding the vow. She then became pregnant with the Pharaoh’s child. She did not want to cause the Pharaoh trouble for his indiscretion, so she committed suicide.

The Pharaoh Seti was completely devastated, he made a vow to be with her again.

Dorothy claimed that the Pharaoh kept his vow as he visited her every night in what she described were romantic encounters between the two. Dorothy stated that the Pharaoh vowed to marry her when they were together in Amentet, this is the Egyptian afterlife.

By 1936, she was divorced and raising a young son. Dorothy moved near the Giza pyramids and began working at the Egyptian Department of Antiquities as a secretary and draughtswoman, even though she had no formal education.. Assisting scholars with their english and publishing her own works, she worked closely with Selim Hassan and Ahmed Fakhry leading her to receive a special mention in Selim Hassan’s ten volume report after assisting in finding the Temple Garden and a secret tunnel on the north end of the Temple.

In 1956 the Pyramid research project was terminated. Dorothy chose a lower paying job in Abydos as a draughtswoman. The town of Abydos is settled in the cradle of a mountain called Pega the Gap. Egyptians once believed this mountain would lead them to the afterlife.

While in this small Egyptian Village Dorothy began being called Omm Sety. Within the villages it was very customary to call a woman by the name of her oldest child. The village of Abydos also held a special meaning to Omm Sety as she believed this village to be where she lived when she was Bentreshyt the priestess in her other life, as this is where the Temple of Seti was located.

Prior to moving to the village, she had visited it frequently and once during a visit would prove to the chief inspector of the Antiquities Department that she had advanced knowledge of the area.

The chief inspector tested her knowledge by asking her to stand in the dark under particular paintings. She was expected to identify the paintings as well and give knowledge on them as a temple priestess would know.

She was able to complete this task. The locations of the paintings had not been disclosed nor had they been published. It appeared that Omm Sety was familiar with the paintings. Omm Sety also went on to reveal that there was a library under the Temple of Seti that contained historical records as well as religious records.

She also made claims that the Sphinx was much older than any one knew. Oftentimes Omm Sety would describe the Temple as a time machine, when entering, she was transported to the past in her memories.

Omm Sety also known as Dorothy Eady spent the rest of her life living in the small village of Abydos. The village was a tourist attraction as the Temple brought many to tour it. Though Omm Sety became a bit of a tourist attraction as well. Omm Sety remained in the village, always studying the temple and the ancient Egyptians, until the day she passed away, April 21st, 1981.

Was Dorothy Eady the priestess Bentreshyt or was she simply imagining this? Could her almost fatal fall have brought forward some memories of her past? Or was she possessed by the spirit of Bentreshyt? I guess we will never know for sure and just leave this to the realms of the unexplained…