In 1946 Angelique Cottin was considered a peasant in Normandy, a northern region of France. Angelique has been described as a very small girl who had a bizarre ability. We now call her ability psychokinesis, which is the ability to move objects with your mind.

This all began on January 15th of 1946 when Angelique was 14. She was weaving silk gloves with a few other girls that evening. Using an oak frame for weaving, the girls witnessed Angeliques frame begin to shake. Frightened and shaken they contacted a neighbor, though the neighbor didn’t believe them and instructed them to continue their weaving.

The young women reluctantly went back to weaving, but as soon as Angelique got near her frame it began to shake and move around again. Angelique knew the other girls were terrified but she was oddly intrigued by the moving frame.

After Angeliques parents learned of the incident, they immediately assumed that she was possessed and must be taken to their church. Though the priest wanted to witness this for themselves. While witnessing this the priest believed this was not possession and that it was a physical condition. He insisted that Angelique’s parents take her to a medical doctor to be looked at.

In the days that passed, Angelique seemed to lose complete control and this strange ability grew worse. If she tried to sit down in a chair it was pulled out from under her or pushed away at other times her bed would rock if she tried to sleep. And once a 60lb table floated up from  the floor when she touched it.

It appeared that any time she got near an object it would move away from her, even if she hadn’t touched it. Though with the slightest touch of her hand, she could send large furniture flying through the room. Some would say when around her they would feel an electric shock when near her, while others reported experiencing a cold gust of wind.

In one incident a man was sitting on a very heavy container and was lifted into the air along with the container when in her presence.

Oftentimes Angelique would become injured by objects she flung with her unexpected movements. It is also noted that she experienced a rapid heartbeat when using this ability. A heart beats upwards of 120 beats a minute. This wasn’t the only unpleasant side effect of her ability, she would often suffer from convulsions.

Angelique was terrified of her own actions and would run away from the scene of her destruction. The ability seemed to be less intense if Angelique was standing on a carpet or even a waxed cloth. Though it was extremely intense if she stood on the bare earth.

Though metal was not affected in any way.

At times Angeliques abilities would not work for several days at a time and unexpectedly appear with no warning. Exhaustion reduced her abilities significantly. 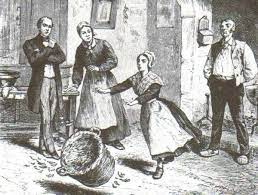 Her very concerned parents took her to a Doctor in Paris. The doctor witnessed many of her abilities. The Doctor referred her to astronomer and physicist Francois Arago who believed fully in psychic phenomena. Dr. Arago created a committee to witness and assess her abilities. The committee witnessed Angeliques abilities and believed it to be real.

Francois felt that Angelique’s abilities were a type of electro-magnetism. He studied her and felt the left side of her body, particularly around her left hand and the pelvis area were where the force originated from.  As well as being warmer than the right side of her body. Also noted was that the abilities were most relevant during the evening hours of 7 and 9 o clock.

When Angelique came near a light object, such as a piece of paper or pen, she wouldn’t have to touch it, just simply get near it and it would blow away as if a large gust of wind blew it away and then within minutes the table would be sent flying if her left hand made a movement.

Francois had also noticed that in some situations most objects only needed to be touched by Angeliques clothes to be moved.

After various observations, Francois noticed Angeliques reaction to magnets. When she came near the north pole of a magnet she would experience a shock, though when approaching the south pole of the magnet, she experienced no affliction at all. The poles of the magnet were changed without Angelique knowing, but this did not change the outcome.

Oddly enough, during the multiple experiments of her abilities, Angelique’s power had no effect on the needle of a compass as a compass is generally a magnetized needle.

By April of 1846, Angeliques abilities appeared to disappear. Though her poor family decided to use Angelique as an attraction for anyone willing to pay to see her abilities. Though during this time as an attraction, most believed her powers were no longer active.

Angeliques unique abilities never returned and some believe they weren’t powers at all, but rather, a poltergeist.

A poltergeist is often described as a spirit, or other type of supernatural entity that is responsible for physical disturbances, including noises and the movement of objects.

Could Angelique really have possessed the ability to throw objects with her hands or mind or was this an actual poltergeist? I suppose we will never really know and have to leave this to the realms of the unexplained…