In the fall of 1988, Jackie Hernandez found herself fully immersed in a disastrous marriage. Pregnant with her second child and caring for her then 2 year old son Jamie, she made the life changing decision to leave her husband and move to San Pedro, California.

In November 1988, Jackie and her two year old Jamie moved into an old turn of the century bungalow in San Pedro, California. Immediately after moving into the home, strange activity occurred within the home.

One of the beds in the home repeatedly would collapse and fall, with no apparent reason. At times Jackie overheard muffled voices coming from the attic and the families cat would run through the home as if it were chasing something on the walls.

One particular day, Jackie had her friend, Kristina Zivkovic over. While the two were washing dishes, the walls appeared to be dripping an odd blood like substance. Jackie herself witnessed things fly through her home, particularly, pencils flew out of a pencil holder.

After Jackie gave birth to her daughter Samantha in April of 1989, the activity grew worse, with orbs, mists, strange smells, and apparitions. Jackie also began having very vivid dreams of a young man in the San Pedro Harbor. She described the setting in the dreams to be of the 1930s and the young man was being clubbed to death. In some of these dreams, Jackie became the young man, reliving his experience of being clubbed with a lead pipe then held under water to drown.

One night after a dream, Jackie woke in the night to use the restroom and saw an old man snarling at her and vanished into thin air. Then one evening after putting her children to bed, Jackie encountered an apparition form out of the darkness. A face, then a full body of an old man, she felt strongly that this wasn’t a friendly spirit and could see the coldness in his eyes.

As the activity that carried on, including water like substances pouring out of the light fixtures and picture frames flying off the wall, she knew she had to seek help, so she reached out to a team of paranormal investigators, led by Dr. Barry Taff.

Dr. Taff holds a doctorate in psychophysiology with a minor in biomedical engineering and is a world renowned parapsychologist. Dr. Taff brought a small team that included paranormal investigators, cameraman Barry Conrad and photographer, Jeff Wheatcraft. 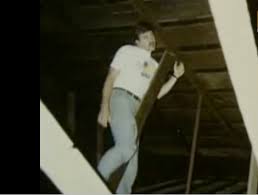 On August 8th, 1989, Dr. Taff and his team arrived at the San Pedro home of Jackie Hernandez and her two children. The team brought cameras, infrared detectors, as well as other equipment to assist in their investigation.

During the initial interviews, Dr. Taff stated the team heard, what sounded like like a 200-pound rat running around the attic. Other team members recall feeling pressure, similar to being under water.

During the evening, a photographer explored the attic and his camera was unexplainably ripped out of his hands but an invisible force. The lens was found separated from the camera body.  The second exploration of the attic was performed by, photographer, Jeff Wheatcraft, who was attacked by an unknown force. Wheatcraft had a clothesline wrapped around his neck and the line was hanging from a nail. Team member Gary Beihm was able to free Wheatcraft from the line.

The team was able to obtain short video footage of Wheatcraft hanging from the attic ceiling. The team also has proof of objects moving, balls and streaks of light.

In the fall of 1989, Jackie left the San Pedro home and moved to Weldon in Kern County, California. Her husband made an attempt to work through their marital issues. The move to a new home seemed to end the haunting. Jackie finally felt comfortable and believed life was going back to normal, but within just a few short months, the marriage was in turmoil again.

Jackie found herself alone, once again as her husband left the home. The home in Weldon was in a remote location and Jackie had little to no friends or neighbors. Many days, she spent hours on the phone chatting with her friends from the Los Angeles area.

One day, Jackie moved a TV into a storage shed, with the help of a few neighbors. When moving the TV, the three saw the image of an old man on the screen, according to Jackie, it was the same old man she’d seen in the San Pedro home. That same night, Jackie was kept awake by a loud pounding from the shed.

Jackie called in the investigators and once the team arrived at the trailer in Weldon, they began experiencing disturbances with their equipment. Though Jackie’s new home, was over 300 miles away it appeared the hauntings had begun again.

The investigative team used a Ouija board, the board told them it was a spirit of the young man who died in San Pedro, the same young man that Jackie dreamed about. The spirit indicated that he was murdered in 1930 at the San Pedro harbor and his murderer lived in the San Pedro home that Jackie lived in.

The session ended when Jeff Wheatcraft was thrust into the air and thrown against a wall inside the trailer home. He abruptly hit the floor and was unconscious, once awake, he stated he felt something squeezing his diaphragm, hitting the wall and being unconscious.

Jackie decided she needed to take action before any one else was injured, she began researching old newspapers to determine who the spirit from the Ouija board was.  Finally she found a story regarding Herman Hendrickson, a young seaman whose body was found floating in the San Pedro Harbor on March 25th, 1930. Further research led Jackie to believe that the murderer may have been a man by the name of John Damon, who built the home she lived in, in San Pedro.

In the spring of 1990, Jackie visited San Pedro and saw a ball of light that led her to a gravestone marker in the cemetery. The gravestone was for John Damon.

Since then the hauntings have stopped. Dr. Taff has always believed that Jackie was a magnet for poltergeists as a result of the emotional issues that were occurring in her life. It was said during the time the investigative team was present, Jackie developed romantic feelings towards Barry Conrad, which resulted in the attacks on Jeff Wheatcraft. Jeff and Barry were very close and always together, which may have caused emotional distress for Jackie, causing the poltergeists to attack him.

Will we ever know what caused these hauntings? Why did they stop? Could the spirits have settled once the names of the spirits were known? Leave your thoughts in the comments!

4 thoughts on “The Haunting of Jackie Hernandez”