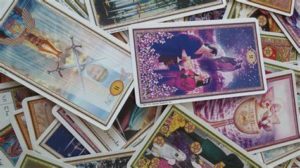 Tarot cards were first used in the 15th century and have evolved steadily throughout time. Originally known as Trionfi which is Italian for Triumphs and most of the cards featured a place or some type of abstraction. Tarot cards have also been called Tarocchi and Tarock. In many parts of Europe the cards were used to play games which are still played in current times. The tarot cards were not used for occult practices until late in the 18th century. Primarily used for game play in Europe, their use evolved into divination and fortune telling. In the earliest decks, the cards depicted suits, usually, Swords, Cups, Coins, Clubs, as well as Kings, Queens, pages. Jean-Baptiste Alliette a French Occultist was the first to use the cards for divination in 1785 and it is said he made a living by reading tarot for others. He even created his own specific deck of cards solely for occult purposes.

Tarot Card decks usually consist of 78 cards that are divided into two parts. First you have the Major Arcana, 22 cards that are said to hold greater secrets. They are numbered in Roman Numerals from I to XXI with the ‘Fool’ card not numbered at all. The remaining 56 cards are then divided into suits. There are four suits with 14 cards within them each. Each suit has their own King, Queen, Knight, Page/Jack. The most well known decks today are the Tarot of Marseilles, Rider-Waite-Smith deck and the Thoth deck. The English occultist Aleister Crowley created the Thoth deck alongside Lady Frieda Harris. Crowley stated that his deck was symbolic of the universe and based on data from the Holy Qabalah.In current times, there are so many variations and decks it would be impossible to keep track. Whichever deck you choose it will be sure to assist you in Cartomancy.