Timothy & Cynthia Lawson were married in 1971 and gave birth to their son, John Alexander Lawson on August 12th, 1978. His childhood was seemingly uneventful, growing up in San Francisco, California. Though it would depend on who you asked.

By 1990, the family had moved to Forsyth County in North Carolina and Timothy and Cynthia were divorced. Cynthia and 12 year old John remained living in the town of Clemmons but Timothy moved back to California.

By 1993, Cynthia was remarried to Johnny James. The two married in Cocke County in Tennessee, and resided at 2749 Knob Hill Drive in Winston-Salem, North Carolina. At one point in time John was diagnosed as being agoraphobic which is an anxiety disorder, schizophrenic as well as psychotic.

John Alexander Lawson would go on to drop out of high school and at one point re-inventing himself as a Satan worshipper. He would also become a local drug dealer.

Heavily involved in drug use he would tell people he was of Iraqi descent and that his mother was a Satanist who named him Pazuzu Algarad.
Some may remember the name Pazuzu from the 1971 film, The Exorcist. The origins of Pazuzu come from the ancient Mesopotamian religion, Pazuzu was the king of the demons of the wind. Thought to be the bearer of storms and drought.

John Alexander Lawson, now known as Pazuzu, also claimed he had the ability to control the weather. In 2002, John went on to legally change his name to Pazuzu Algarad, stating in an affidavit that the change in name was due to religious purposes. It did not cite the religion. 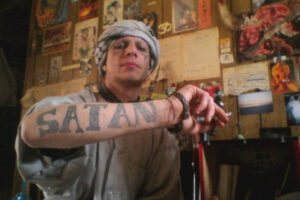 The home he shared with his mother became heavily trafficked by various locals to buy drugs, though some who visited believed themselves to be Pazuzu’s followers. He was described as having a charisma that could draw in the outcasts or misfits of the area.

The house eventually became complete chaos. Filled with sex, filth, drugs and a jet black front door. Evil will triumph was spray painted over one door and the walls were adorned with satanic graffiti and art.  Hundreds of dead and living flies were scattered throughout, decaying animal carcasses were all over as well and what was described as a blood-like substance smeared on the walls. Feces in piles all throughout the home, it was undetermined if the feces belonged to humans or animals or both. Some stated he rarely used the bathroom but would relieve himself in the corners of the house, leaving the awful odor of feces and urine.

Creating a complete character for himself, he would describe himself to others as a combination of Alistair Crowley, Anton LeVay, and Charles Manson. He boasted of his animal sacrifices, black magic rituals and bloodletting in the local cemetery. Many remember him stating he received a drug-like rush from eating an animal’s beating heart. Others remember him bragging to have murdered and eaten two prostitutes, then burning and burying their remains.

Claiming to be a full Satanist for quite a while… he began to lose interest and began focusing solely on Luciferianism.

I know you wonder what the difference is… and the easiest explanation is Satan and Lucifer are clearly two different beings. Satanists focus on the physical nature of man, while Luciferians believe Lucifer is spiritual as he was once an angel. Though this is definitely best described in a whole other episode.

Pazuzu Algarad believed Lucifer to be the embodiment of evil and was very serious about his beliefs. He also worked hard to terrify everyone he encountered. His body odor was overwhelming to most as he never showered, some say at one point it had been a year. He claimed the power of Satan cleansed him so bathing was no longer needed. At one point he had filed his teeth down to look like a vampire’s teeth or spikes and split his tongue in two.

Oftentimes Pazuzu would tell others he had killed, cannibalized and buried people in or around his home Though, everyone believed it was part of the character he was building for himself. He wanted to appear evil, powerful and completely terrifying.

His run-ins with the law began in about 2008, convicted of larceny and placed on probation.

Amber Burch alongside Krystal Matlock were both Algarad’s fiances. Both frequented the home and were rumored to assist Algarad with anything. Amber Burch even filed her teeth to match Algarad’s spike shaped teeth.

In 2010, Algarad was charged with accessory after the fact and later convicted in the shooting death of 30 year old Joseph Chandler. Chandler’s mother had reported him missing, his body was later found near a river. The actual shooter was Nicholad Rizzi who was convicted of involuntary manslaughter while Algarad was convicted with accessory after the fact and only sentenced to probation.

In 2011, Algarad was charged with the misdemeanor assault of his mother because he placed her in a chokehold. On another occasion one of his fiance’s, Amber Burch, slapped and attempted to choke Algarad’s mother. Both were convicted and sentenced to 12 months of probation.

Algarad was monitored after this shooting and while they wanted to find a reason to search his home or property, they were unable to find anything. Even with a tip from Algarads own mother, Cynthia. She had heard that Amber Burch had been involved in shooting a man. 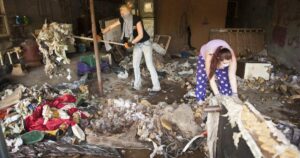 Pazuzu Algarad’s reign of terror ended on October 5th, 2014, when the Forsyth County Sheriff’s Office assisted by the North Carolina State University Forensic Anthropology Unit, the North Carolina State Bureau of Investigation and the Medical Examiner’s office, were able to execute a search warrant to find skeletal remains in shallow graves of Algarads back yard.

Authorities discovered the remains of victims Josh Wetzler, 32  and Tommy Welch, 31. Both had been missing since 2009.

While waiting for his fate in prison, Algarad was moved to Central Prison in Raleigh, North Carolina in May 2015. This move was necessary due to Algarads mental health issues. Though, by October 28th of 2015, he was found unresponsive in his cell at about 3:00 am. Authorities were unable to resuscitate him. His cause of death was determined to be severe loss of blood. He had a wound to a major blood vessel. Pazuzu Algarad had bitten through his left arm with his teeth that were filed into spikes. His death was ruled as suicide.

Amber Burch pleaded guilty to second degree murder on March 9th, 2017. Convicted of murder, armed robbery and accessory after the fact to murder. Amber Burch was sentenced to a minimum of 30 years and eight months and with a maximum of 39 years and two months.

On June 13th, 2017, Krystal Matlock pleaded guilty to conspiracy to accessory after the fact to first degree murder. Sentenced to a minimum of three years and two months and a maximum of four years and 10 months in prison.

Was John Alexander Lawson, also known as Pazuzu Algarad, mentally ill or possessed by a demon? I suppose we will never truly know, and have to leave this… to the realms of the unexplained…