The myth of the Manananggal began in the Philippines and is quite popular in the Visayan Regions. The name Manananggal is a word derived from the Tagalog word “Tanggal”. Tanggal is defined as to remove or separate and in some cases it is used to describe a severed torso. 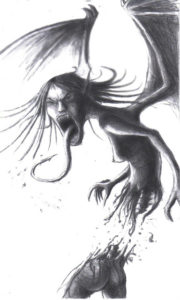 The myth of the Manananggal states that one can actually turn themselves into a Manananggal by chanting an incantation, using oils and obtaining an egg with a black baby chicken. Once turned, it is believed that the black chick will live inside of the Manananggal.

The Manananggal appears as a female, with a severed torso, bat-like wings and is described as a hideous female creature with large eyes, wild hair and claws for fingers. It preys on sleeping women who are pregnant and sucks the hearts of their fetuses with it’s long thick tongue or it just sucks the blood of someone who is asleep.

It has been known to prey on men at times. It appears as a beautiful woman and will lure them into secluded locations with a bit of seduction and eat them alive. The Manananggal particularly prefers to feast on the stomachs, liver and hearts of the men they prey on. It often preys on grooms who have been left at the altar.

Once the Manananggal chooses a victim, it will fly to their home and land on the roof and find an entry. Though it is said that if they find pots of uncooked rice, salt or ash, it may not enter your home.

Other than hopefully steering it away from your home, the only way to rid it, is to kill it. It can only be killed when sunlight directly hits its broken torso. It’s best to wait until the Manananggal’s torso is separated when trying to kill it as it is at its most vulnerable. You can use salt or crushed garlic on the lower half of the torso and it will be fatal, not allowing the two pieces of the torso to rejoin ever again. Being separated causes the Manananggal not to be able to flee before the sunrises and it ultimately dies.

In addition to salt or crushed garlic, it is said that daggers, bright light, the tails of stingrays or vinegar will make it vulnerable.

This myth of this vampire-like cannibal is primarily told in the Philippines, but at times it is told in Malaysia and in Indonesia.

Have you ever experienced the Manananggal? Leave your stories in the comments!

1 thought on “The Manananggal”