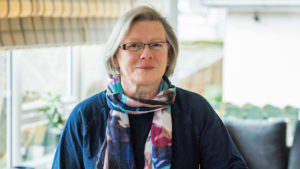 How did this happen?  Out of the blue, Joy noticed her husband began to have a “woodsy, musky” odor to him. Obviously, she felt he wasn’t showering enough and would beg him to take showers more often. Though, no matter how many showers he took, the smell persisted. Joy learned to live with the odor, believing it to simply be her husband’s body chemistry.

12 years later, her husband Les Milne, was diagnosed with Parkinson’s disease at the age of 44.  Parkinson’s Disease is a nervous system disorder that is quite progressive. It affects movements of the body, can cause tremors and stiffness. Parkinson’s affects more than 10 million people worldwide.

A few years after her husband’s diagnosis, Joy joined a Parkinson’s support group and clearly smelled that same musky odor she smelled on her husband. She began to wonder if the odor was related to the disease itself. 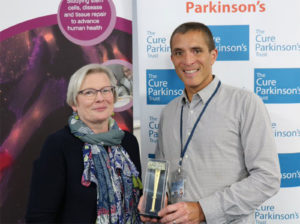 Joy explored this idea further with her husband. Les Milne was a doctor and Joy was a nurse, both felt they should take this information to an actual scientist. The couple visited Dr. Tilo Kunath a neurobiologist at the Centre for Regenerative Medicine at University of Edinburgh, in Scotland. Unfortunately, Tilo Kunath was not interested in this theory at this time. Months went by after their visit to Edinburgh, and Kunath discovered a new research regarding dogs and how they may be able to smell cancer. This immediately made him think of his discussions with Joy regarding Parkinson’s smell.

Kunath immediately devised some testing with groups who had the diseases and those who did not, asking them to take home plain white t-shirts to wear over night. All would return with the t-shirts for Joy to smell. She would take a shirt from a box and would provide a score for each one.

Joy was asked if the person who wore the shirt was in an early stage, late stage or did not have Parkinson’s at all. Kunath discovered that Joy was extremely accurate.

Dr. Tilo Kunath and several other scientists first published this work in March of 2019 in the publication ACS Central Science.

In  2015, Joy’s husband, Les Milnes passed away due to complications from Parkinson’s Disease. Though his wife Joy has suffered the loss of her beloved husband, she now assists science in research to prevent this deadly disease.

Do you believe there are others who can smell diseases?