The small town of Byron was part of a land grant that Jose Noriega received in 1835 from the King of Spain, he then sold 17,000 acres to a pioneer named John Marsh for what is now known as $500 equivalent to three U.S. cents per acre.

Later in 1841, the earliest Anglo settlers from the east arrived, they would settle at John Marsh’s ranch. The town of Byron went on to grow and their first post office opened in 1878 and by 1889 a man by the name of Lewis Mead would develop a hotel that was built around 57 hot springs.

It was named the Byron Hot Springs Hotel.

This resort style hotel would attract movie stars, famous athletes and the upper class as they were attracted by the health benefits of the sulfur springs. The three story wood building had a laundry facility, gas plant, an ice plant and a few cottages scattered on its property.

and natural mineral waters. Sulfur itself is said to assist in healing skin irritations and infections as well as help treat arthritic pain, menopause symptoms and digestive disorders.

It was no secret that the Glitterati loved this resort. The hotel and resort had visits from Joe DiMaggio, Charlie Chaplin, Fatty Arbuckle, Mae West, Jack London, Clark Gable and Alice Day.

On July 25th 1901 the hotel was destroyed in a fire, but a second hotel was built by 1902. This time the structure utilized stucco rather than just wood.

The hotel seemed to thrive but late in 1902 the town of Byron would grieve a large tragedy and victims would take solace in the hotel.

On December 20th 1902, a passenger train known as the ‘Owl’ was traveling with passengers from Oakland, California to Los Angeles. At one point the steam from the flue of the train dripped into the firebox of the engine. The fire is what kept the train moving forward.

This caused the ‘Owl’ to stop. It was halted on the tracks. Unfortunately there was another train coming from behind. It would reach them within 30 minutes, they needed to alert the train coming to stop.

This train was known as the ‘Flyer’ and it was from Stockton, California. Two brakemen from the ‘Owl’ walked up the tracks with red lanterns to alert the ‘Flyer’ to slow down or halt. The engineer of the ‘Flyer’ saw the lights of the ‘Owl’ but did not see the brakemen and their red lanterns. He assumed the train was halted but was on a separate track. 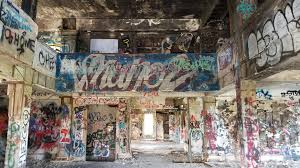 The ‘Flyer’ rammed the ‘Owl’ at full speed, killing 11 people almost instantly and injuring more than a dozen more. Eight of the injured were taken alive to the Byron Hotel. The staff had created a makeshift medical ward. The Hot Springs Hotel had a prominent doctor named Dr. Bird who cared for the wounded. Though one of the injured, a 22 year old man named Clarence Olufs died in the hotel office only a half an hour after the train wreck. He was a student at U.C. Berkeley on his way home to Fresno to see his mother.

His last words were, ‘Poor mamma. I was just going home to see her,’

Residents of the small town gathered at the scene of this disaster while others headed to Byron Hotel to help with the injured.

Many would say the hotel was haunted and share sightings of a ghostly child running through the hotel and some would say they saw a man in white in white rags wandering around.

Though there are only a few actual reported deaths on the actual property of the hotel. One being Lewis Meade’s wife, who apparently passed in a private residence on the hotel property.  Blanche Mead passed from a stroke on the day after Christmas in 1905.

Wealthy businessman Albert G. McElroy of Philadelphia died at the hot springs in July of 1906, and in 1909 a San Francisco Port Inspector P.C. Hynes died of a stroke. Foul play was not suspected in any of these deaths. 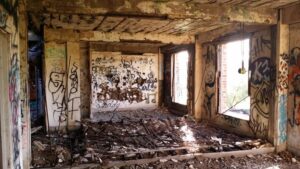 Other than that nothing else has ever been reported or confirmed, but once again though… The hotel  burned down on July 18th 1912.

A third and final hotel was built in 1913 and this time it was a four story, brick structure. It is said there was a fire during this time in the elevator, but the structure survived.

In 1938 the hotel and resort closed, Lewis’s second wife Mae was running the hotel now as he had passed. WWII would begin and a series of lawsuits pushed the hotel to its end. In 1941 the government leased the building and utilized it as a military interrogation camp. It housed German and Japanese prisoners of war and was called Camp Tracy.

By 1945 this camp was ordered to shut down and the Byron Hot Springs hotel was placed for sale. It was purchased by the Greek Orthodox Church for $105,000 and became a Monastery for many years.

Since then, it has been sold many times, vandalized and heavily protected by the residents that live around the land. If you aren’t careful, they may chase you away, heavily armed.

As of 2021 a developer has purchased the land and is planning a restoration of Byron Hot Springs hotel and resort.