Aleister Crowey’s Boleskine house is for sale once again, though this time, it has been heavily fire damaged. The Boleskine House is located on the south-east side of Loch Ness in the Scottish Highlands. Aleister had purchased this home from a family in 1899, and was called the Manor of Boleskine and Abertarff which was named after the local parish in the area. When purchasing this home, he intended to practice his magic, which he titled the Sacred Magic of Abramelin. The location appeared perfect for this. In his book, The Confessions of Aleister Crowley, he felt the location of his home had to be in a secluded area. He specifically wanted a door to open to the north from his oratory as well as a terrace outside of the oratory, covered with fine sand and would lead to a lodge where the spirits he conjured would congregate.According to Crowley, it took 6 months of preparing, complete celibacy, abstinence from alcohol in order to invoke his Guardian Angel. He would also have to summon from the dead, 12 Kings and Dukes from Hell, then bind them in order to remove their negative influences from his life. During this summoning, Crowley was suddenly called away by the leader of the Golden Dawn in Paris. Before leaving, Aleister Crowley did not finish his summoning nor did he banish what he had summoned, which lead to the Boleskine House being haunted as well as the strange occurrences.Crowley performed countless black magic rituals on the property and some feel it got so out of hand that it harmed his lodge keeper, Hugh Gillies, who suffered many tragedies while at Boleskine. Aleister Crowley finally left Boleskine in 1913. Since then it has exchanged many hands, some even famous! In 1918, after World War 1, famous Hollywood actor, George Raft became the center of a major scandal at the Boleskine home. George Raft was fraudulently selling shares for a pig farm on the Boleskine property, that never existed. Later in 1945, Major Edward Grant purchased the home and committed suicide with a shot gun in Crowley’s bedroom in the 1960’s. His housekeeper found the Major dead from the gun shot wound and his dog playing with part of his skull bone.Just a few short years later a newlywed couple moved into the home, the wife was unable to see as she was blind.  Jimmy Page at Boleskine House in 1973.After living in the home for only one month, the new husband abandoned his bride in the home leaving her unable to see and to wander the home. A filmmaker, interested in the occult rented the home in 1969 for a few months. In 1970, Jimmy Page purchased the home.

Jimmy Page, a guitarist and founder of the band Led Zepplin was a collector of anything related to Aleister Crowley. Though Jimmy Page was interested in the home and the Crowley history, he was also fascinated by the house for the prior history it held. Page felt that many strange things occurred there that had nothing to do with Aleister Crowley, simply strange or bad things that happened in the past. In the time that Page owned the home, 20 years, he only spent 6 weeks physically at Boleskine.  Page asked long time childhood friend, Malcolm Dent to move in and restore the home and live in the home for as long as he liked.Malcolm Dent, lived in the home for many years as well as met his wife and raised a whole family within the home. Dent claimed the home was perfect as it had amazing views of the loch  and was spacious and quiet. Dent was a large skeptic of anything paranormal and did not anticipate encountering anything strange.Though sometime after the first few weeks, he began hearing rumbling sounds in the hallway and rumbling in the walls. He also awoke one night to sounds of some type of wild animal. It sounded as if it was banging outside his door. Aside from the noises, Dent witnessed chairs, switching places, carpets and rugs rolling up, doors slamming and more.Jimmy Page worked hard to restore the home with his longtime friend Malcolm Dent overseeing this project. He brought artist, Charles Page to paint murals that were Crowley inspired. 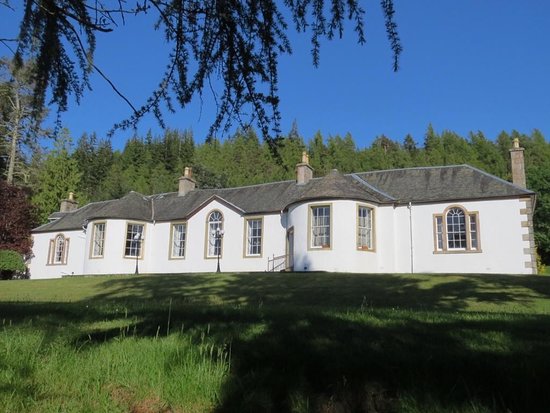 In 1991, the house was once again put on the market and purchased by a couple named Ronald and Annette MacGillivray in 1992. The couple claims when they bought the home is was not in good condition and they spent significant amount of money renovating the home. It was said to have four bedrooms and 4 bathrooms, with a drawing room, a dining area, library and a few other smaller rooms throughout the home. The couple turned the home into a guest home or hotel. In 2000, the home was used to film the BBC documentary, The Other Loch Ness Monster, a priest and a minister performed blessings and many other clerics were brought to the set to assist in keeping the crew safe from any demonic activity.The crew still found themselves experiencing strange occurrences, like swarms of beetles and strange equipment malfunctions. Some of the crew claim to have suffered from nightmares about Crowley. In 2002, Ronald MacGillivray passed away. Neither believed in the paranormal and stated that they had never encountered anything strange in their time in the home.After Ronald’s passing, Boleskine was sold again, but this time to a private owner. It is said the new owners were Dutch and turned the then guest house, back into a residence. The new owners simply used it as a vacation home and were rarely at the property. They owned the property from 2002 – 2015.In 2015, a motorist called in to report that there were flames coming from the home. When the fire was out, it had incinerated nearly 60% of the home.  No one was in the home at the time and there are no injuries or death due to the fire.The largely damaged structure has now been placed on the market as of April of 2019. It is said to be unlikely that the structure could ever be rebuilt to its original state unless some one with large amounts of money is willing to invest in such a project. The Boleskine House is described as a Category B listed building which is considered a Historic Environment.