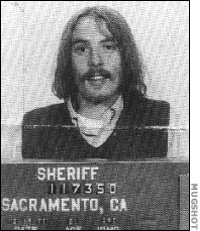 A vampire is a folklore creature that exists by feeding on the blood of humans. In current times, this creature is simply a myth. Though it is possible that certain mental illnesses can lead an individual to believe they must feed on human blood as well. That is exactly what Richard Chase believed.

There are three factors in determining a sociopath or a homicidal person. If any two of the factors, regardless of the combination are present, it’s almost certain the individual will commit murder. This is called the Macdonald Triad. The triad was created by psychiatrist, J. M. Macdonald. The three factors are : cruelty to animals, an obsession to start fires, and consistent bedwetting well past a specific age.

Richard Trenton Chase exhibited all three factors by the age of 10. Born on May 23rd, 1950 in Sacramento, California. There isn’t a lot of information about Richards early childhood, though many state he was an abused child at the hands of his parents.

By the time Richard was 18, he began to abuse drugs and alcohol heavily and became a hypochondriac, constantly telling others that his heart would stop beating as someone had stolen his pulmonary artery. At times his paranoia caused him to believe his blood was turning into powder.

To alleviate his heart and blood conditions that he believed he had, Richard would hold oranges on his head so the Vitamin C would absorb into his brain. He later went on to shave his head as he believed his cranial bones were moving around and he wanted to watch them move.

To cure his blood that he believed was turning to powder, Richard would visit the woods and capture small animals to kill and drink their blood. He believed the blood would cure his ailments.

Richard also believed his mother was poisoning him. He moved out of his family home and into an apartment with roommates. His roommates found his abuse of alcohol, marijuana and LSD unbearable. And if that wasn’t bad enough, Richard, roamed the apartment completely naked regardless of who was present.

Richards’ roommates demanded that he move out of the apartment, but he refused. Deciding that they simply could take no more of his erratic behavior, all of the roommates moved out.

During this time that he was alone in the apartment, Richard began killing small animals again and bringing them to the apartment to drink their blood. At times, he would place the dead animal in a blender and mix it with Coca Cola. Drinking the blended blood and soda, he believed he was curing his shrinking heart.

His stay in this apartment didn’t last long as he could not afford the rent. Returning home his father found Richard another apartment quickly.

By 1973, Richard was 23 years old and was involuntarily committed to a mental institution after injecting himself with rabbits’ blood. He now had blood poisoning.

Staff and patients at the facility were terrified of Richard, some nicknamed him Dracula. Richard was often found with blood on him, he claimed it was due to shaving, though, he was actually biting the heads off of small birds and drinking their blood. He could reach through a small area of his window and grab the birds from their ledge to bite their heads off. At times Richard also drank blood from therapy dogs. He had stolen syringes and obtained the dogs blood to drink.

Richard was diagnosed with paranoid schizophrenia. He was given multiple tests surrounding psychotropic drugs. Once the facility placed Richard on medication, he was released. They believed he was no longer a threat to society. He was released in 1976 to his mother.

His mother assisted him in lessening the amount of medication he was taking until he was completely off of it. She didn’t feel he needed medication and was convinced he was cured. She then helped him obtain an apartment. Once again, he lived with roommates, but not long after Richard moved in, they all moved out.

In mid-1977, Richard was found naked in a field near Lake Tahoe, Nevada. He was covered in cow blood. Local residents had called regarding a man who was naked and bloody. Officers arrived and found a bucket of blood in Richards truck. Determining it to be cow blood, they released him with no further action.

A few months after this, on December 29th, 1977, Richard killed a father of two, 51 year old, engineer, Ambrose Griffin. He used a .22 caliber handgun during the drive by shooting. Griffin was assisting his wife in bringing in groceries when he was gunned down.  Richard was NOT a suspect in this crime at this time. 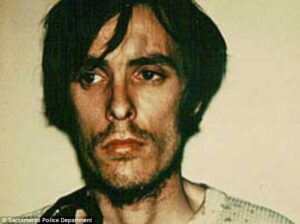 Two weeks later, he attempted to enter a woman’s home, but believed that a locked door meant he was not welcome. He firmly believed that unlocked doors were a definite invitation inside. In another incident, he entered the home of a couple. Their doors were unlocked. He went through their belongings and defecated and urinated all over their infant child’s belongings.

On January 23rd of 1978, he broke into the home of Terry Wallin. 22 year old Terry was 3 months pregnant and married to David Wallin who was at work during the early afternoon attack. Once again using a .22 caliber handgun, he shot Terry three times. Two of the shots were to her head.

After shooting Terry to death, he dragged her body into her bedroom and had sex with her corpse. He then went on to cut Terry’s body open and remove several of her organs and took her blood to the bathtub to bathe in it.

Before leaving, Richard cut off one of Terry’s nipples and drank the blood from her breast. He then shoved dog feces into her mouth and left the home. David Wallin arrived home after work and found his wife on their bed, mutilated. Horrified, he ran to a neighbor’s home to call police.

The first responding officer later stated that the scene had given him nightmares for months.

FBI was called in as local authorities felt this gruesome crime could be the work of a serial killer. FBI Agent Robert Ressler, who is skilled at profiling serial killers came up with a profile and believed the killer would strike again if they weren’t able to catch him quickly.

Though, FBI and authorities were not fast enough. On January 27th, he broke into 38 year old Evelyn Miroth’s home. Her friend Danny Meredith was present in the home, but was shot by the .22 caliber handgun. Richard then shot Evelyn. Then moved on to shoot her six year old son, Jason, in the head as he was running to his mothers room. He also shot Evelyn’s 22 month old nephew David Ferreira in the head. He went on to have sex with Evelyns corpse and cut slits in her neck, to drink her blood. After mutilating Evelyn, he found the deceased 22 month old, David, he cannibalized the child, eating brain matter and his organs.

While mutilating and consuming David’s body, there was a knock at the front door. The knock startled Richard, he grabbed Danny Meredith’s car keys and fled the scene in the stolen car with the 22 month old dead child.

The visitor that startled Richard entered the home and discovered the mutilated bodies and called authorities. Authorities found perfect handprints and shoe imprints in the blood.

Agent Ressler profiled Richard Chase, he believed the killer to be unorganized, nothing would be planned or calculated. This led him to believe the red station wagon he had stolen would be nearby and his home would most likely contain evidence.

The stolen station wagon was found not far from Evelyn Morith’s home. The driver door was wide open and keys were still in the ignition. Agent Ressler believed the killer was not too far from the car. More than 65 officers walked the streets of a specific perimeter. Some knocked on doors and others questioned residents walking in the area. They were specifically asking if anyone had seen a Caucasian man covered in blood. 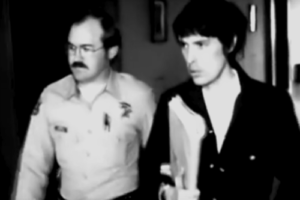 Authorities finally discovered Richard Chase’s identity when a woman who had attended high school with Richard in 1968,  told police she had an encounter with him. On January 23rd between 11:30 am to 12pm. She was getting in her car to leave a local shopping mall when he approached her. She stated that his clothes hung loosely off of him as he was quite thin. His sweatshirt was covered in blood. He followed her to her car and stated that he wanted to talk to her. She got into her car and he attempted to open her door, but she drove away. She identified the man as Richard Chase.

Based on this information, they realized that Richards’ apartment was a little less than a block from where they found the stolen station wagon and about a mile from the crime scenes. Authorities would stake out his apartment and it wasn’t long before he was seen leaving with a box under his arm. Surrounded, he attempted to run to his truck. Officers forcefully apprehended Richard Chase. They had to tackle him to the ground.

Upon searching Richard, they found the .22 caliber gun and Daniel Meredith’s wallet in his back pocket. The box contained bloody rags he appeared to be throwing out.

Once in Richards’ apartment, they found a calendar marked with the words ‘today’, on the days he murdered Terry Wallin and Evelyn Miroth. Authorities went on to find a 12 inch butcher knife, rubber boots, animal collars, three blood filled blenders and containers inside the refrigerator with various body parts stored inside them.  The floors, walls, ceiling, eating and drinking utensils as well as the refrigerator were all covered in blood. They found several articles regarding the murder of Ambrose Griffin, but they found no signs of the missing 22 month old that he had taken from the Miroth household.

Baby David was found on March 24th, in a box, mutilated and decomposed, in a vacant lot near a church.

Very early in 1979, Richard Chase would stand trial. He was charged with six counts of first degree murder. This includes the murder of Ambrose Griffin as shell casings were matched to Richards gun, determining that he was in fact Griffins killer.

Richard Chase pleaded not guilty by reason of insanity. This insanity plea was rejected and on May 8th, 1979 a jury found him guilty of all counts. Sentenced to death at San Quentin State Prison.

Richard Chase allowed Robert Ressler and John Conway from the FBI to interview him at San Quentin State Prison. During this interview, he stated he was aware that he had killed but believed it not to be his fault as he had to do whatever was needed to survive. He also spoke of UFOs and Nazis, he was very fearful of them. During the interview he asked agent Ressler for a radar gun so he could apprehend Nazis and UFOs. He felt the Nazis could stand trial for the murders rather than him.

At one point during this interview, Richard Chase handed Agent Ressler macaroni and cheese that he had bees saving for weeks in his pants pockets. He believed the prison was affiliated with the Nazis and were trying to poison him through his food. He asked Ressler to test the food for poison.

December 26th, 1980, Richard Chase was found dead in his prison cell. A later autopsy found it was an overdose. He had apparently been saving his antidepressants for several weeks and for some reason took them all at once.

Were the crimes committed by Richard Chase, due to schizophrenia or were they drug induced. Could it have been both?

9 thoughts on “The Sacramento Vampire”