Armie Hammer was named after his great-grandfather Armand Hammer, an oil tycoon and his  great-grandmother was Russian stage actor and singer, Baroness Olga von Root. Armie was born August 28th, 2986 in Santa Monica, California. His father Michael Armand Hammer was a businessman, owning several businesses, such as Knoedler Publishing and Armand Hammer Productions, a film/television production company. His mother Dru Ann was a bank loan officer. Armie has one younger brother named Victor. Armie describes himself as half Jewish and states his great grandfather the oil tycoon and philanthropist were Jewish emigrants to the U.S. from the Russian Empire. Armie’s mother’s family is from Tulsa, Oklahoma, but he mostly resided in Texas near Dallas for years. When Armie was 7 years old, his family moved to the Cayman Islands where they resided for five years before returning to the states and settling in Los Angeles. In LA, he attended Los Angeles Baptist High School in the San Fernando valley, though he dropped out by the 11th grade to pursue a career in acting. Armie broke into the industry with small guest appearances in several popular television series. Arrested Development, Veronica Mars, Gossip Girl, Reaper and even Desperate Housewives. His film career began in 2006 with the film Flicka and later co-starring in the film Blackout. His first leading role occurred in the movie about the Christian evangelist Billy Graham.  And in 2010 his major breakthrough role was in the movie the social network which was about the creation of facebook. This would be the same year he married t.v. personality Elizabeth Chambers.Yes, she has many cooking shows on the food network. The couple went on to have two children. Though in 2020 the couple announced on instagram that they were separating.  From 2016 – 2021 the actor pursued roles in independent films and really aimed his focus on independent work. January 12th  2021 an anonymous Instagram account began releasing screenshots of texts that they claimed were from Armie. They stated he had sent these to various women. He denied that the messages were from him and stated it was an online attack. The messages themselves were sexual fantasies that included rape, violence, and even cannibalism. This woman comes forward with the texts and claims she had a four year long affair with Armie Hammer and he would send her graphic and violent texts about cannibalism, his rape fantasies and expressed desire to drink her blood. She published all the texts and screenshots along with texts and messages that came from his other exes. During this time Hammer was filming a movie with J. Lo. Shotgun Wedding. He willingly left the movie on January 13th, 2021 amidst these allegations and was replaced by Josh Duhamel.He made the following statement, “I’m not responding to these bullshit claims but in light of the vicious and spurious online attacks against me, I cannot in good conscience now leave my children for 4 months to film in the Dominican Republic. Lionsgate is supporting me and I’m grateful to them for that.”More and more women came forward corroborating the anonymous instagram user that had initially published the information. More screenshots and photos are released, some of women in bondage positions. Even older 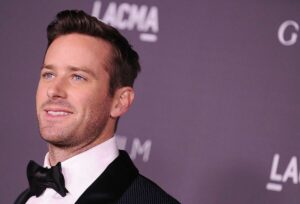 interviews were resurfacing to show a pattern of his behavior with women. In one particular interview he stated that the silver lining to stay in the Caymans near his ex, was having the ability to F**k  Miss Cayman Islands while he was there. He was then forced to apologize. The allegations of his abuse of women continue to rage and he leaves another project. This time it was The Godfather spinoff, The offer.By February of 2021, The Los Angeles police dept., is investigating him, his talent agency has dropped him and the magazine Vanity Fair has released a very negative article about his family including his grandfather being accused of murder. By March of 2021 women’s-rights attorney Gloria Allred is representing a woman named Effie who claimed that Armie Hammer raped her violently over a course of four hours. It is believed the woman, Effie, is the anonymous Instagram as the insta accounts name was @ houseofeffie. Of course Hammer’s lawyer states their relationship was always consensual.Though the text screenshots kept being published from various women with some of the most disturbing statements from Armie, such as “I want to bite pieces off of you” And…“I am 100% cannibal. I want to eat you. Fuck. That’s scary to admit. I’ve never admitted that before.”Or one of the most chilling…. Cut a piece of your skin off and make you cook it for me.” Other messages revealed, “I’ve cut the heart out of a living animal before and eaten while still warm.” Though the worst message I saw was, “When I tell you to slit your wrists and use the blood as lube for….” And I can’t say the final word of that statement, but it starts with ‘A’ ladies and gentleman… You fill in the final word of his statement or just go look it up online. 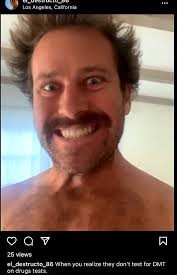 As the screenshots continued to be published, several women begin to accuse Armie of actual sexual violence, rather than just text messages. Once again he was dropped from another project, The Million Dollar Spy. And exits the cast of the Broadway show The Minutes.By September 2022, Discovery+ aired a three-part docu series regarding his family’s dynasty as well as the allegations of abuse. Two former girlfriends are interviewed in the series and share disturbing details of their relationship with Hammer. Things just continue to get worse for Hammer from here… Some did some digging on his past and found that in 2020 the heart of the pandemic, he took on a job doing some construction on an abandoned motel in Joshua Tree. A friend had purchased the motel and he began to do some work to keep busy during 2020. Though, in a twist of fate, bodies of missing women had been found in the area near the motel he had been working on. It is said that the bodies were torn apart and pieces spread in the area. Though, I have not confirmed that. Based on these bodies and the current cannibalistic texts sent to several women, many believe he had something to do with these disappearances and deaths. However, authorities have said many times, he is not a suspect, person of interest or believed to be involved in any way. Some say, the cannibalism fetish has nothing to do with actually eating human flesh but it’s more of a fantasy…Maybe we will never know… Is Armie Hammer an actual cannibal? Or the victim of vengeful former lovers? Is he really a violent lover? I suppose we will never really know and just have to leave this to the Realms of the Unexplained….