Christmas morning is generally a morning packed with love, gift giving, warm food and fun, but this wasn’t the case for Kristy Bamu. His dead body was found in the bathtub at his sister’s East London flat. Kristy and three of his siblings were sent from home, Paris to enjoy some time with their sister during the Christmas holiday.

The trip began as any other family trip would, the two sisters and two brothers arrived without incident. Though once arriving to their sister, Magalie Bamu, her boyfriend Eric Bikubi, began to accuse Kristy and his two sisters of bewitching a child within the family.

The siblings denied this, and Eric Bikubi began to beat the siblings and deny them food, drink or sleep. Eric, a football coach, would yell at Kristy, “who’s controlling you”.

Eric and Magalie believed the siblings had brought Kindoki into their home.

Kindoki is the belief in possession of evil spirits. Oftentimes those residing in the Democratic Republic of Congo as well as the United Kingdom believe those who have fallen victim to Kindoki, must have an exorcism performed. Children are particularly subjected to beatings, water submersion and starvation and this is exactly what happened to the four siblings.

All four siblings were forced to pray and chant the night before the attacks on Kristy. When the brutal attacks began for Kristy Bamu, the three siblings he travelled with were forced to join in and attack him as well. Kristy’s siblings had escaped the torture and beatings by admitting they were witches.

At one point, one of Kristy’s sisters, Kelly, was thought to only be pretending that she was beating her brother. Eric forced a lightbulb into her mouth as punishment then squeezed her throat while holding a knife to her chest.

During Kristy’s brutal attack, Kristy kneeled on the floor and floor tiles were smashed repeatedly over his head. Various tools were used on Kristy as well.  A hammer was used to smash his teeth out while his sister Magalie cheered on her boyfriend Eric. Made to drink his own urine and endure his sister tearing his ear off with pliers, Kristy begged to die.

At least 45 calls were made to the children’s father. Pierre was in Paris and had received messages stating that the children were sorcerers.  A call coming from Kristy came… begging his father to pick him up or he would be killed. His father Pierre, was in disbelief, he had never known his daughter Magalie and boyfriend Eric to behave poorly towards the other children.

Though at one point, Eric told Pierre, if he didn’t come collect his children, he would murder them all.

Due to a heavy snow storm, he was unable to make travel arrangements until December 27th, though it was too late. Around midday, on Christmas day a badly injured Kristy was thrown into the bathtub. He was so incredibly injured and weak, he was unable to hold his head up above water and eventually drown.

The remaining siblings were made to get into the tub as well and were hosed down. This caused flooding that affected the other flats. Neighbors became irate and began beating on the couples door.

At one point, someone called a plumber. The plumber arrived at Eric and Magalie’s flat, but was turned away by Eric. The authorities were then called.

When authorities arrived, they found Kristy’s drowned body and recovered blood stained tools, including pliers, a hammer, ceramic tiles, chisel and knives. Kristy suffered from 101 injuries before he finally died from this prolonged torture. 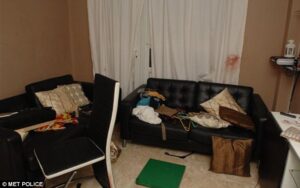 Once arrested, Eric Bikubi denied murdering Kristy, he stated he was suffering from schizophrenia and could not be held responsible for his actions. He was sentenced to 30 years in prison. Meanwhile Magalie Bamu, Kristy’s sister was sentenced to 28 years. She stated that she did not want to torture her siblings, but her boyfriend, Eric forced her.

During the trial, the judge made the statement, “The belief in witchcraft, however genuine, cannot excuse an assault to another person, let alone the killing of another human being.”

Kristy’s sibling Kelly, stated that Kristy begged his sister Magalie for help and forgiveness, but she did nothing to stop the torture.

Did these individuals truly believe the four siblings brought Kindoki witchcraft into their home or was mental illness a factor? This may just be left to the realms of the unexplained…