Some of you may only remember, The Men in Black you saw in the hit movie, starring Will Smith. While the movie may have been fictional, some believe it was based on actual beings. 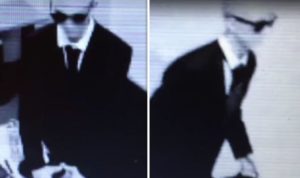 The Men in Black sightings go back as far as 1947, to a man name Harold Dahl. The sighting took place on Puget sound, eastern shore of Washington’s Maury Island. On June 21st, 1947, Harold’s son, Charles, and their dog were collecting logs when they saw six donut shaped objects hovering above their boat. The objects were said to be hovering only about a half a mile above Harolds boat. Some time into this strange phenomenon, one of the objects fell and debris fell along with it. It is reported that some of the debris hit Charles on his arm. The family dog did not survive injuries caused by the debris. During the ordeal, Harold Dahl was able to take pictures of the aircraft with his camera. Met with skepticism, he showed his boss, Fred Crisman, who decided to go to the location of the ordeal and look for any evidence, but instead saw an object hovering himself!In the days that followed, Harold Dahl was visited by a man in a black suit, Harold and the man go to a small, local diner and discuss what Harold had seen. The man in black recounted back to Harold in exact detail, what Harold had seen, he even expressed knowing more of the ordeal than Harold would want to know. Harold was warned to never speak of the incident or bad things would happen to him. A day or so later, the U.S. Government stated that Harold Dahl and his supervisor, Fred Crisman, admitted to making the whole story up and the Government determined this to be a hoax. 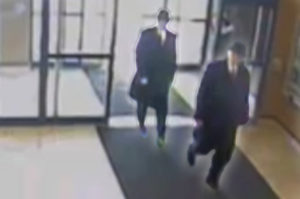 In July of 1967, Robert Richardson, a resident of Toledo, Ohio, contacted the Aerial Phenomena Research Organization and reported that he had crashed into a UFO while driving. It was night, dark and he was rounding a bend in the road when an unidentified object lay in the center of the road causing the collision. Robert claims the object disappeared on impact. Robert Richardson contacted the police. Police noted only Robert’s skid marks and nothing else. Richardson, went back to the scene later and discovered a strange piece of metal that he took home. Three days later, Robert was visited by two men in their twenties, dressed in black suits. It was 11pm at night and the visitors did not identify themselves, but asked many questions regarding the accident. The visitors only stayed for about 10 minutes and departed in a 1953, black Cadillac.One week later, there was a visit from two different men. The pair wore black suits and drove a more current model Dodge vehicle. Robert remembered that one had an accent and both had dark complexions. The mysterious men tried to convince Robert, he had not hit anything at all, but asked for the strange metal he had found and threatened the safety of his wife, if he didn’t turn it over to them.

“If you want your wife to stay as pretty as she is, then you’d better get the metal back”.Only Robert, his wife and two senior members of Aerial Phenomena Research Organization knew of the strange metal. APRO had no connection to the mysterious Men in Black.

Albert K. Bender was obsessed with UFO’s, was one of the most influential researchers who went on to found the International Flying Saucers Bureau as well as the Max Steiner Music Society. While both groups were successful, the International Flying Saucers Bureau was mysteriously shut down. In March of 1953, Albert reported that he had been visited by three Men in Black at his home. These men would only communicate telepathically, but gave Bender a metal disk with instructions. Bender claimed the three men also shared information regarding UFOs and the origins of a UFO. Many asked him to share what he had learned, but he refused and became ill for several days after this visitation. He could not eat, and suffered from multiple headaches as well as fear. In 1962, Albert Bender published a book recounting what occurred during the visitation, Flying Saucers and the Three Men. Many believed Albert was simply dreaming.

Even the well known Canadian-American Actor, producer, comedian, screenwriter, Dan Aykroyd has claimed to have encountered Men in Black! In 2002 Aykroyd claims two men in black stood by a sedan while he was having a conversation on a cell phone regarding an appearance on Saturday night live. When glancing away for a second, the black sedan disappeared. Later in the day he was informed that his appearance was cancelled on the show. Dan Aykroyd believes this to be the work of Men In Black. One of the most recent sightings of the Men in Black occurred in 2008, by a man named Shane Sovar. The sighting took place in Niagara Falls. Shane and other staff reported seeing a UFO in front of the hotel he worked for. Sometime after the sighting, mysterious Men in Black arrived at the hotel seeking the manager and Shane who had witnessed the UFO. Neither were at the hotel at the time of the Men in Black visit, but security footage did capture the Men in Black!

2 thoughts on “Men in Black”