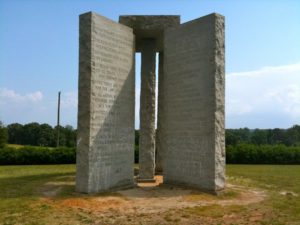 Elberton Granite Finishing Company, a huge provider of granite for memorials and other various architectural projects, were tasked with a large and unique project in June of 1979. A man by the name of Robert C. Christian approached the company asking them to build a structure that would function as a compass, a calendar and a clock that would be able to weather any and all catastrophic events. Joe Fendley from the Elberton Granite Finishing Company believed Robert C. Christian was insane and gave him an enormously over priced quote, which was higher than most projects he bid. He figured this would cause Christian to walk away. Though it did not discourage Christian, he happily accepted the quote. It was believed that Robert C. Christian was a pseudonym as he explained during payment arrangements that he represented a large group that had designed and planned for the stones to be built for the last 20 years. The group planned to remain anonymous.Elberton Granite Finishing Company agreed to the project and Christian produced a scale model and pages of the specifications. These stones, which he titled, the ‘Guide Stones’, would reside on five acres of land that Christian purchased on October 1st, 1979, from area farmer, Wayne Mullinex. Christian gave Mullinex and his family lifetime rights to the property allowing their cattle to continue to graze around the guide stone site. The agreement with Elberton Granite Finishing Company included a contract that directed the company to destroy all information and plans regarding the monument upon completion of the project. 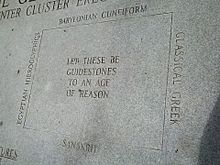 On March 22, 1980, 100 to 400 individuals gathered to witness the unveiling of the stones. In time, ownership of the stones was transferred to the city.

The tablet in front of the stones reads, “Let these be guide stones to an Age of Reason”. The tablet also contains info regarding the stones, such as the languages it contains, size, dimensions, astronomical features, date it was installed on the land and talks about a capsule buried under the tablet.  There are messages inscribed in the stones, 10 commandments, if you will. Written in 8 current languages,( English, Spanish, Swahili, Hindi, Hebrew, Arabic, Chinese, and Russian) as well as four extinct languages, ancient Greek, Egyptian, and Hieroglyphs. The messages are as follows :
-Maintain humanity under 500,000,000 in perpetual balance with nature.

-Guide reproduction wisely – improving fitness and diversity.-Unite humanity with a living new language.-Rule passion – faith – tradition – and all things with tempered reason.-Protect people and nations with fair laws and just courts.-Let all nations rule internally resolving external disputes in a world court.-Avoid petty laws and useless officials.-Balance personal rights with social duties.-Prize truth – beauty – love – seeking harmony with the infinite.-Be not a cancer on the earth – Leave room for nature – Leave room for natureAside from these inscriptions are some well thought out features built into the formation of stones. The stones have a built in channel that can indicate the celestial pole, there is a horizontal slot to show the annual travel of the sun and a sunbeam can shine through and mark noontime all year. The outer four stones are situated to mark the 18.6 Lunar Declination Cycle as well as a few other astrological features. The company had to bring an astronomer from the University of Georgia to assist with the complex astrological features. 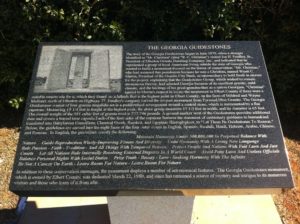 The stones were defaced in 2008, polyurethane paint and graffiti covered the stones with messages, “Death to the new world order” This was the first time the stones had been defaced and vandalized.  In 2014, the FBI was contacted by Elbert County as the stones were vandalized and the phrase was in graffiti,  “I am Isis, goddess of love”. Other than these incidences, the stones stand strong today. The Guide stones are a heavy weighted topic for many conspirators, but have also gained the opinion of celebrities, magazines, and authors. Yoko Ono once described the messages on the stones as, “a stirring call to rational thinking”.
Wired Magazine felt the messages are, “Ten Commandments of the Antichrist”.Activist, Mark Dice demanded at one time that the stones, “be smashed into a million pieces…”Many conspiracy theorists believe that Robert C. Christian belonged to an evil secret society that worshiped the devil.Most believe the stones to carry post-apocalyptic messages. As if the creators were leaving us a guide to rebuild after catastrophe.What do you believe? Are the messages on the stones post-apocalyptic messages? Leave your thoughts in the comments below!